So yesterday I arrived in Skyros after one train ride, two flights and a vomit-inducing car ride up to Skyros Centre. And yes I actually did vomit.  My taxi driver literally hugged each corner of the winding road like a long lost relative – hurtling so enthusiastically from one bend to the next that in the end I had to get him to stop so I could feed the ants in the bushes. :-( Note:  I hate arriving on writing retreats with my head down the toilet  (as I am inclined to do –actually this is not true as this is the first time it has happened and probably can’t be classed as an inclination –yet!!)But I am pleased to say that after closer inspection my toilet seems to be fully functional and not on strike – like the rest of Greece.
At least the rest of the journey was  a little less uneventful although I was amused to encounter a lady at the Athens' Airport HelpDesk who said she only spoke English sometimes. I suppose I was lucky to catch her at one of those times. Oh and I was also followed through a security scanner by a black cat who was travelling on the plane with its master. It was very unconcerned with the whole thing and just sat in a plastic tray lapping up attention and cuddles. 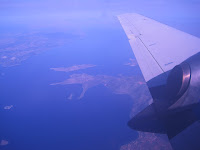 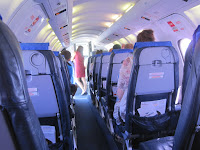 The flight to Skyros was on a tiny plane – the second smallest plane I have ever been on. The smallest one was in Peru where I flew over the Nazca Lines. I remember clapping the pilot as we came in to land and he told me not to clap until we had actually landed. Anyway the plane was very cute and had a most glamorous flight attendant who flirted with the pilot and filed her nails throughout the whole journey. She was very lovely though and when I thanked her at the end she gave me a cuddle like an old friend.
But enough on travel and more about Skyros. It is a very beautiful island – quite rugged and unspoilt. There are plenty of cats and quaint narrow streets with whitewashed houses and flowering jasmine trees. The local people are incredibly friendly and the whole town seems to come alive once the sun has gone to bed.
The Skyros Centre where I am based is also very nice. The staff are friends and very un-staff like. The man in charge, Julian, reminds me of Terence Stamp in Priscilla Queen of the Desert minus the wig and dress.  And I am very proud to report that last night at the dinner table when the conversation turned to poo –it was not at my instigation. 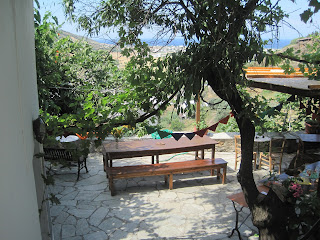 Now of course the real work begins – I might even have to write something soon – or even worse share!!
Posted by Joanna