So I have come to Athens for a few days with D as he has been on holidays in Greece too and we decided to meet up and conquer the Acropolis together. 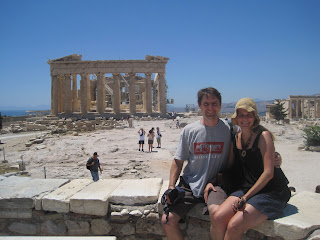 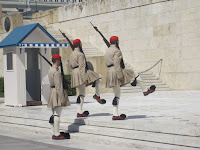 Actually we started by watching the changing of the guards at the tomb of the unknown soldier in Syntagma square ( scene of recent protests). Don't really know how to describe the guards' ceremony but they appeared to move in the manner of pom-pom-wearing-sloths-doing-a-course-of-knee-extending dressage.
Honestly if these guards ever went to war and confronted enemy soldiers they would only have to do this very special dance and the enemy would die of laughter. Of course it is a very solemn ceremony so I did not dare laugh at the time and I was very excited to have my photo next to one of the stars once the show ended. 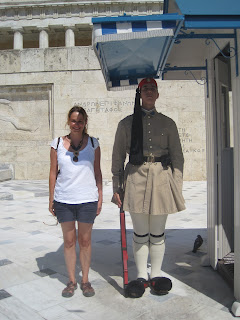 The following day D and I made out way to the Acropolis via the New Acropolis Museum which was a pleasing oasis of air-conditioning and artifacts. On the top floor is the Parthenon's Doric frieze with the parts currently in the British museum (courtesy of Lord Elgin) done in white caster. Their absence was referred to a wound and a cultural hole so no love lost there. 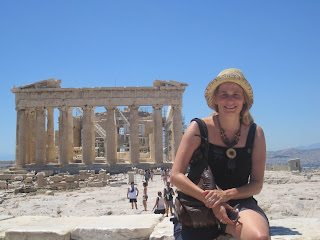 Then it was on to the Acropolis which was a very hot and tiring affair for laydees who have spent their last two weeks going for short paddles in the sea and drinking banana smoothies. It was exciting to see the Parthenon though. One of those sights that you know so well from books and documentaries and is always a joy to see in the flesh. The view across Athens out to the sea was spectacular too and I did much 'oohing' and 'ahhing' to show my appreciation.
The heat was quite oppressive though so I kept my Parthenon joy to a minimum so I could descend back down in search of cool bar. 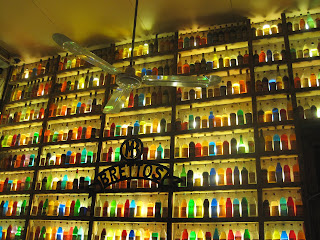 I also met a rather handsome man in one of the streets of Athens too and we shared a moment. 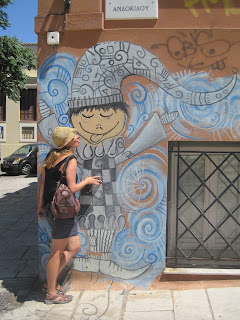