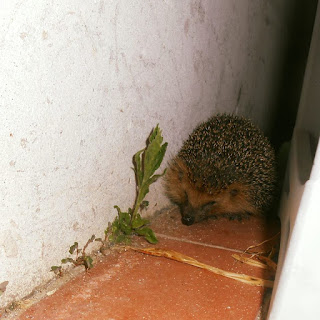 Meet Edoardo. I originally called him Roger but then I realised he probably answered to a more Italian sounding name.
He often comes onto my terrace in the evening to eat the biscuits I leave out for my garden cat ( whom I have named Dude because of his enormous balls which really need to go.) Sometimes Edoardo even likes to come into my kitchen and dive head first into the stash of cat food I keep in the corner.
The cats don't seem to mind, in fact, I think Pirate quite likes him.

I am going to keep leaving out biscuits for him because a student told me that some people around here like to eat hedgehogs. Hopefully he won't feel the need to venture from this safe haven.
Posted by Joanna 1 comment: 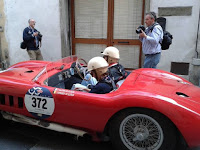 On Saturday the 1000 Miglia ( a vintage and classic car race )came to San Miniato. Well, it passed through it to be exact. The race actually starts and ends in Brescia ( up north) and does a loop through Rome which my dad would be highly approving of because he does appreciate a loop. (Nothing disappoints my dad more than having to backtrack in a car or even when out strolling.)

Anyway this year the route came through San Miniato on its was back up from Rome. 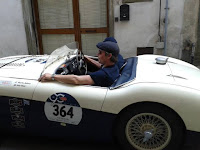 I didn't even  know about the event until Saturday morning when I went out to buy pickled onions - my favorite Italian treat. No onions were to be found but there were plenty of Italian flags waving from people's houses and  an awful lot of men rubbing their hands with delight.

In the afternoon I did what all good Italian folk do and stood roadside, licking a gelato, while all manner of eccentrics vroomed past in their cars. 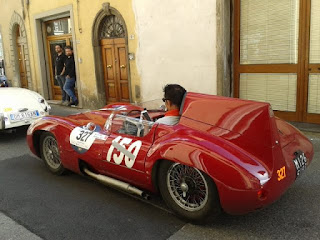 On Monday it was my birthday and I spent it with Three Paw in Florence.  It was a difficult appointment. Alberto told me he didn't think the chemotherapy was working on her leg tumor. It appears to be doing a good job on her metastasis because this hasn't grown at all but the one on her leg seems unstoppable.  I started crying and Alberto looked at me and said that this was not a cat on her last day yet. He said she was actually no different to the cat he had met almost three months ago. That she was still a happy, comfortable and healthy cat ( cancer aside.) I was grateful to him for saying this. It is hard for me sometimes to be objective about how she is. The tumor is just so ugly so when I see it, the sight consumes me.

We are trying  a new drug Palladia. I have to give it to her every second day. She is also taking a different herbal medication for any pain which she might be feeling.

I have to say since she started her new regime the edema on her paw has gone down and she seems much more comfortable. The tumor smells a bit because there is some necrosis but in general I would say the rest of the week has been quite restful and happy.

For her anyway, I am a constant wreck.
And another year older! 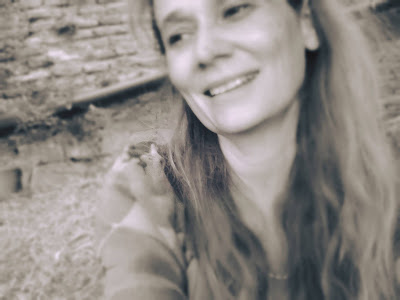 Birthday shot!
In between the tears :-)

I don't tend to write much about my writing. That's not to say there isn't any writing going on. It goes on quite often but it isn't as successful as I would like it to be. I mean that in two ways. Both from the actual words themselves, which sometimes won't mesh no matter how long I spend moving them around, and also on a more empirical level.

I just don't seem to be able to catch a wave. And all the rejection slips slowly pile up like layers of filo pastry. So paper-thin and without any real substance, telling me ' not for us but send us your next one.' I have received some amazing, unsolicited encouragement over the years from writers and publishers and yet still I don't seem to be able to translate it into more than this.

I know I need to get out more, that is part of the problem. Also more confident. More prolific. More everything!

But I do have two little victories I can at least share for today.

First, I have a story coming out in an Antipodean Sci-Fi publication later this year. They want me to record a podcast to go with it. I am happy about this publication because they are Australian and the short-story publishing scene there seems a little precious,  if you ask me. Last year I sent a story to a fantasy magazine there and they sent me feedback questioning whether polar bears would actually go dancing in an Australian creek ( um - it's fantasy!) and one of them even alluded to a pedophile angle because my lead boy was befriended by an older drifter. Honestly, I couldn't quite believe what they said and I looked more closely at the magazine and it just seemed to be filled with the same names over and over again.

Probably my better news though,  is the fact that I recently discovered that one of my past stories (The Moon-keeper's Friend) actually  inspired a reader to create her own recipe for rose-water churros. Best possible review for a story, don't you think!

So I guess I will keep writing, maybe I will be able to inspire a whole cookbook out of my tales, That would be something!

Right now I have an infestation on my nose of charming proportions. I took it out for a stroll around town and I am waiting for the village mayor to knock on my door and banish me to some sort of leper turret. It is stress-related I am sure so there is nothing I can really do but ride it out.
Fortunately I didn't really see that many people because I took the old coal walk which runs along the spine of the town and below my back garden.
I went there around Christmas time when they had all the nativity scenes up. Some of them are still there as are the toy animals in the makeshift stable. Mary, Joseph and Jesus have gone though, probably back to the Middle East for some sun.
It is a beautiful walk with a little place along the way where you can have a barbecue or  picnic on some dilapidated, wooden tables. I try to walk along here as often as I remember too. 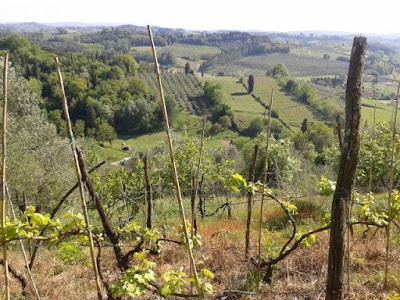 I went a while back with a friend and had this picture taken. it is about the only one of me I have seen of late where I don't look utterly spent. 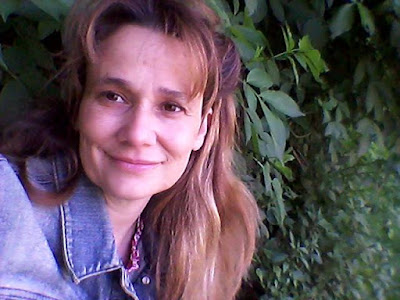 Ooh apart from this one with my lady, 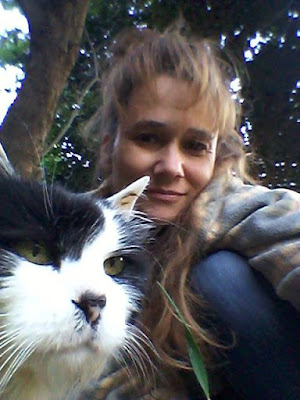 Prancing amongst the artichokes 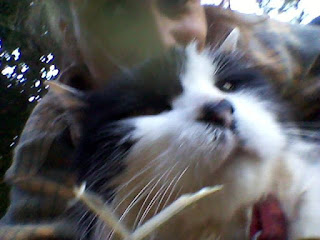 What I love about Alberto the vet is that when three paw hunkers down and flattens her ears, he doesn't become wary or nervous or bothered. He generally has a laugh and strokes her head and talks to her affectionately but in a normal voice. I admire him so much. His specialty is oncology and it must be so hard journeying with these animals through their treatments until the day comes when the road ends and he is the one who administers it. Often vets don't spend that much time with people's pets but in his job he needs to be more invested and  so I am grateful that he exists and he is with us right now.

The last week was tough because one morning I found a pool of blood on the floor with a little drippy trail to where Three Paw was. I might add she was sleeping soundly so whatever violence had occurred it didn't seem to be troubling her. I was worried she was trying to tear part of the tumor off which would be a big indication of pain but Alberto thinks because it happened so soon after the last chemo it was probably the necrosis of part of the tumor. This is not a bad thing so I was relieved by this news.

Her tumor is getting bigger though. The metastasis is about the same but I can see the one on her leg growing. This was always going to be the case as the cure for her type of cancer is amputation which is what happened to her seven years ago. Alberto and I really did think about amputation. He did research and I contacted a family in Portugal with a cat who has only two legs. Neither of us was afraid of this option as cats adapt very well but because she had metastasis already it would have meant amputation followed almost immediately by chemotherapy. It might have bought her a few more months but the metastasis was present so I made the heart-wrenching choice of having less time with her but enabling her to enjoy the garden on her own for as long as she could - this would have been very difficult if she was down to two paws. I remember sitting in Alberto's office and saying between tears. 'Her name is Three Paw not Two Paw'  and him nodding to me compassionately with gentle, chocolate eyes.

Sometimes as I see the sand shifting through the hourglass, I have second thoughts but then I see her ambling into the long grass and I feel heartened by her freedom. In fact so free is she that she even managed to do her old trick of disappearing into a neighbouring garden four doors down. No easy feat given it means jumping a fence, climbing logs, ploughing through shrubs before climbing about 24 stone stairs. It took me two frantic hours to locate her with Pirate howling from the wall ' She's gone, she's gone.' Fortunately the village is used to me prancing through their artichoke garden in my pajama pants with a harried look on my face. Now the neighbouring gardeners don't even blink an eyelid, they just wave a hand and say 'prego.'

I told Alberto about her escapade and he had a good laugh. We both agreed this was a cat with some fight still left in her legs.
Posted by Joanna No comments: