Earlier this year San Miniato lost one of its most colorful characters - Franco the Barber. And by lost, I don't mean he disappeared into the sea never to be seen again (a la Harold Holt) or he got caught up in a magic trick gone awry :-( if only this were the case.

I remember noticing at the time his barber shop was closed, which was unusual, but I had figured it was cold and an 85-year-old man had surely earned the right to a sleep in from time to time. Then I saw the local voluntary ambulance folk ferreting amongst the clutter in his shop and I began to wonder.
I had also noticed a sign on the walls of the village announcing the passing of a Franco Oliva but I hadn't connected the dots because I never knew his surname. Anyway by the time I put it all together, genius that I am, I had missed the funeral  - by only one day. I felt really disappointed.

I liked Franco. He always wore a bright red jumper, was slightly pervy, and gave me pens with lamps on them. We had always waved every time I passed his shop - well, when he wasn't cutting the hair off bald men's heads that was. We had a running banter about him loving summer and me loving winter and now as the heat has begun to suffocate the days I find myself thinking of him often.

It took me a while to find his final resting place. First, I visited the wrong cemetrery. Then I visited the correct one but had been misinformed he was at the back when actually he was at the front. Finally this week I found him so I told him all about the heat and how sorry I was I never got to say goodbye. I feel particuarly sad about this because in the weeks leading to his death I had hardly spoken to him. It was early January and I was still much consumed by Three Paw I could barely look up. I wish I had just once, if only to say goodbye. 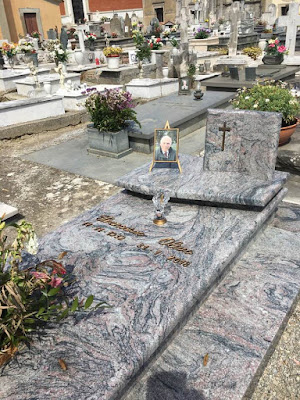 This morning I woke up early to the sound of a whipper-snipper munching its way through my jungle of a garden. To be fair I had asked the gardener to come some weeks ago and then figured he had forgotten ( and then had been relieved he had forgotten because I  was low on cash). So, of course, he comes on a Saturday morning in a week when every single student has failed to pay me. Never mind I couldn't turn him away. The weeds had completely obliterated the stairs so I couldn't even walk down them now and the olive trees were so tall they had blocked the entire view from my terrace. He asked me what I wanted doing and I waved my hands at all the armpit-high stinging nettles and said they should probably go. I told him not to worry about the very bottom which has become completely wild and probably has lions in it. Then he asked me about the olive trees. For as long as I have been here they have been untamed and pretty much blocked the hills and vineyards which undulate behind my home. I suppose in the way they have given me an illusion of privacy even though no one except the birds can see me. Anyway, he said it was a shame to have them so high so I agreed to have them cut. The results have been breathtaking. 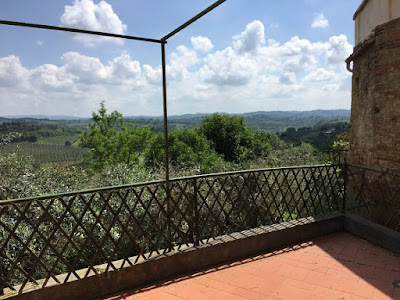 I do kind of feel vulnerable outside now.  It's like the whole landscape is my backyard now and I feel as if  I  could almost fall into the hills. It's beautiful but I feel exposed. Like I can't hide. Maybe this is a good thing. Only time will tell.

In the meantime, I suppose  I should do some gardening. This pot seems to be coming along nicely. 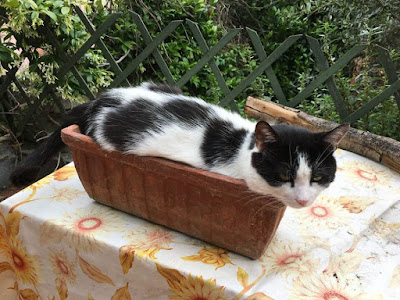