Don’t think this renders me heartless though – I still have my heart; it’s just too tired and fragile for this adventure. Hopefully it is at home snuggling up to my toy pig and remembering to breathe.

The flight from Basel to Istanbul was actually delayed for about two hours this afternoon which gave me ample time to get cozy with my neighbours. So cozy in fact that when I left them at the transit lounge in Istanbul the woman kissed me on the cheeks and asked me to spend the week with her in Istanbul instead. She was an old woman –with a big black bun (streaked white) on her head and eye for the men. She only spoke Turkish but got the man sitting on the other side of me to translate everything she said – which he did from Turkish to German. Amazingly I seemed to understand it all – it’s like I had a Google translator in my head. Interestingly enough I also understood everything the man said including his compliment to me of ‘schon arse’ when I bent over to help the old woman with her seat belt. Anyway halfway through the trip the woman slapped me on the leg (quite hard) and pinched my flesh and said I made her happy. I think she was a bit lonely.

Now she is gone and I am sitting in the airport feeling quite small. At least there is a sea of duty free for me to drown myself in for a while.

Big birthday wishes for my sister. I’ll have a Turkish coffee for you while I’m here.

Ok - so bear with me here. It's cold, it's grey, everyone is frowning extra hard in the street - I have been forced to rely on X-factor (UK version) on a Saturday night to get me through the weekend. Anyway last night was Guilty Pleasures week and I was delighted to discover that Matt Cardle took on one of my all time favourite when-you-are-on-you-own-or with-a-select group-of- friends-truly-wrong-yet truly-right sexy dancing songs. Ah 'Hit me baby one more time' unplugged acoustic version by my most adored ex-painter and decorator - listen and weep. It truly is a guilty pleasure!

Of course it has got me thinking about those other guilty pleasures in life.

Perhaps there should be an official Guilty Pleasures Day - a proper public holiday and everything - with a parade (for those who find parades guilty pleasures etc.) I wonder who I should write to about this?
Posted by Joanna No comments:

time to visit a one eyebrow land again me thinks

Yesterday I went to visit a colleague from work who has just rescued a gorgeous dog called Sprocket from the pound. She lives in France so i got to take my first ever trip on the blue bus which runs from Schifflande all the way to la belle France ( taking all of a mighty 4 minutes.) As the bus passed through the border controls I suddenly realised that I had completely forgotten to bring my passport - fortunately all the police in France are currently trying to quell petrol protests so no one was even there waiting to catch me. Anyway my friend and Sprocket were at the bus stop waiting for me and we had a nice walk back to her house where a very pleasing afternoon was spent drinking coffee in front of her open fire, gassing about men and dogs, before graduating to Alsace cremant and pizza in the evening. I would even say I was a little bit tipsy by the time they brought me home but I'm really glad I dragged myself out for the afternoon.
Speaking of visiting different countries I suppose it is time I outed myself - I am off to Lebanon next weekend for a week. I have mixed feelings about this decision which was made at 2 am in the morning and can't help wondering sometimes if Florence might have been a more relaxing choice. Still Joanna J has never been known to make things easy for herself so I am trying to get myself excited at the prospect of returning to a land where the one eyebrow shall surely reign supreme.
Posted by Joanna No comments:

Today Ulla and I put on our raincoats and went to do some recycling and shopping. In Basel you have to put all your bottles into different recycling bins according to colour: white, green, brown. I quite enjoy throwing the bottles in the bins because they usually make a very satisfying smashing sound (like having your own little Greek restaurant experience minus the moussaka.) I didn't find it as satisfying this time though as I have been doing plenty of smashing at home. Yes it continues!! Last night I kicked a champagne glass spectacularly across the floor. It made a beautiful constellation just like The Milky Way. (Fortunately it was empty - so no wastage there!)
Anyway after recycling I did a bit of grocery shopping and bought lots of green vegetables - I am very attracted to the colour green right now. Then on the way home Ulla spied a very lovely pair of boots in a shoe shop and demanded that we go in so she could try them on. Unfortunately we couldn't get them over her wheels so I did what any good friend would do and bought them for myself. Luckily I bought all the vegetables before the boots as I probably won't be able to afford to eat for a while.

*******
I have been trying to think of something to write to all the friends I know I have not communicated with in months/ perhaps even years. It was not my intention to be this remiss but the fact is I have been. I have been neglectful and for this I am deeply sorry. I borrow from
Khalil Gibran's words on friendship

And let your best be for your friend.
If he must know the ebb of your tide, let him know its flood also.
For what is your friend that you should seek him with hours to kill?
Seek him always with hours to live.
For it is his to fill your need, but not your emptiness.
And in the sweetness of friendship let there be laughter, and sharing of pleasures.
For in the dew of little things the heart finds its morning and is refreshed.
I hope I can embrace this example and be a better friend to all I love. :-)
Posted by Joanna 1 comment:

Today's man of my dreams

Last night I dreamt I went to Beirut and stayed with a couple who kept feeding me sugary doughtnuts in the shape of turtles. I then flew to Lugano on a plane which somehow managed to fly under a bridge and land in an undercover carpark. I had come to watch my boyfriend ( Frank Lampard - oh no!!) play cricket for Germany. My dad was there as well, I think he might have been playing cricket. I wanted to introduce him to Frank but Frank had gone to take a shower with his mates.

All week we have had beautiful, sunny weather here in Basel but today it seems the October grey has finally come to rest. I Like this weather. It's slanket weather. It's snuggle-up weather - if only Frank were here with me now !!! Perhaps I shall take slanket for a walk this afternoon just to defy Glamour magazine.
Posted by Joanna No comments:

This morning I woke up to the sound of church bells calling people to prayer. The sound of church bells is a very European/British thing for me and I love listening to them break the morning silence. I actually love the call to prayer (the adhān) in Muslim countries for the same reason even though theirs is somewhat earlier (and often rather more penetrating) than the lazy nine o'clock bells.
The most beautiful call to prayer I have ever heard was actually in Africa ( not Damascus as I am sure some folk might expect me to say.) I was in a tiny Dogon village in Mali where D and I had been travelling for a couple of days with a guide called Willi. Unfortunately I don't have any digital photographs from this area so I have found some here instead to give you an idea of the area. It was actually a lot drier when I was there. Just dirt and dust and stripped down boa boa trees. Yet it was still very mesmerising.
I remember wandering the markets and watching men wearing pointy hats and long, flowing cloaks pass by as if they were Gandalfs on a stroll through an African Middle Earth.
On the second night we stayed in Ende which was much like many of the other Dogon villages along the escarpment except that it was also the home to the spiritual leader ( the Hogon). Perhaps it is him who I heard sing so beautifully.
I remember lying on a mudroof in this village and waking to an expanse of sky and stars and the most sublime music you can possibly imagine. Like something out of a mystical fairytale which didn't punch its way into my sleep like the normal prayer wails do but tended to sail through the air and blend with my dreams. I cannot recall a single note of the song I just remember that gripping realisation in my heart that I might possibly have just heard the most beautiful sound I will ever hear in my entire life.
I believe to this day it still is.
Since I don't have any picture of the area to add to the blog I shall add one of my favourites taken earlier in the trip . The whole game actually stopped until the goats had made it safely through. 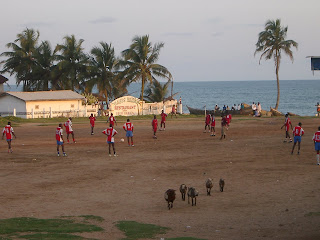 This picture was also taken from the same place which was along the coast in Ghana. 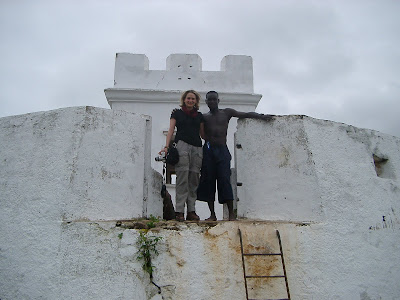 ps - safe travels to D who is on a journey of his own today. 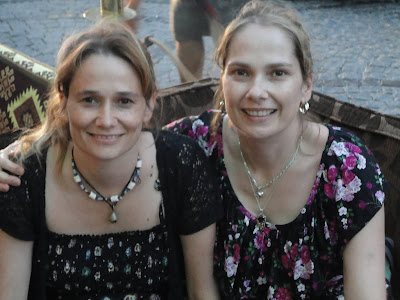 I thought I would add a happy snap taken of me and my sister when she was over in the summer. Nothing like two sunshine smiles to brighten a glum day.
I have been krank this week with a festery nose/ throat/ chest combination. I continue to praise the person who decided to add balm to kleenex tissues. Can you imagine a time before that? Inconceivable!
Fortunately I am a proud owner of a snuggie (aka slanket - ) so I have been slanketing around my apartment feeling quite smug. Smug and sick :-)
Of course then you can imagine my dismay when I read the September issue of Glamour whereupon it dared to suggest that wearing a slanket was one of the top 14 things never to do. Thankfully I read on and discovered it actually meant never to do in public- Phew! Clearly personal slanket orgies in the confines of one's own home are still ok. Not that this would stop me wearing my slanket outside if needs required. I mean I am sure the same people who poo poo the slanket also poo poo
* wearing days-of-the-week socks with sandals
* wearing blouses inside out for the whole day with the label on clear display
* wearing hats that invite the question ' are you a Gypsy by any chance?'
all of which I have done with aplomb in the past two weeks alone.
Posted by Joanna 1 comment: