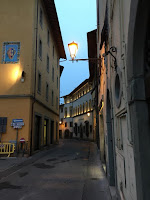 Today I decided to treat myself to a cappuccino at my local patisserie. "Such extravagance!" you cry. Well, one of my students finally paid me a month late and I felt I should celebrate my sudden wealth.  Anyway, while I was sipping my treasure in the cafe, I overheard some people speaking in English. You have to understand that in my village the speaking of English is a rare and sweet thing; like wild dolphins in the Bosphorus; James Blunt hitting number one; Pirate NOT coming in from the garden just to use her toilet tray. The gregarious part of me ( usually on hiatus) decided to ask them what their caper was and it turns out they are on a mask-making course for three months. They are working in an old bar that closed down last summer. I walk past it most days and have often looked in and seen people working but I had presumed they were locals doing a short course. But no..these are people from all over the world, even Australia. They were super nice too and invited me to come see their work one afternoon when they are there. I will definitely visit. Not straight away mind; don't want to look like a stray dog in frantic search for a pack. Even though I kind of am. The funniest thing is when they told me what they were doing I thought to myself ' wow look at these people living and creating  in a small town, what an adventure!" Then I had to stop myself and say 'hang on Joanna, isn't that what you are doing?'

Sometimes I need to get more out of my head, I think. 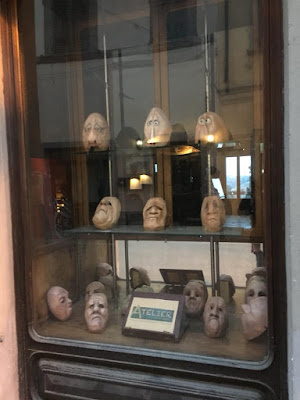 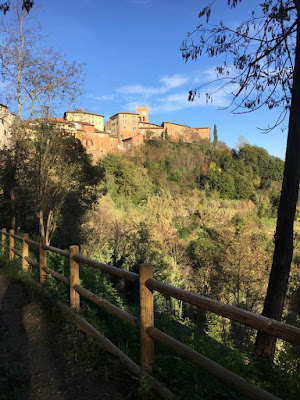 You know you have made it into the inner circle of the village when Gino, the bus driver, stops the bus outside your door to drop you off. 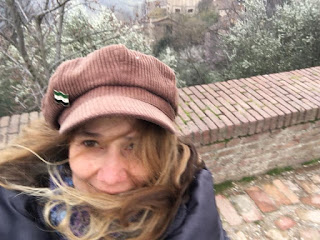 It is mid-afternoon here now and the outside temperature is -2 degrees. I know there are far colder places in Europe right now but for here this is considerably brisk. I have the heating on ( extravagant, I know) but it never really does a great job of warming the place up. I have worked out why only recently. It is because on one side I have a garage and the other a stairwell so there is no communal heat for me to take advantage of. I am my own little icicle, shivering on my own.

Days like today make me grateful that Three Paw has gone to the artichokes. She would never be able to get warm enough I think. Better to be lounging amongst greeny foliage, basking in the warmth of the eternal Tuscan sun.

I know I am going to sound a little mad but on Saturday I took her to the beach for the day. She always loved the smell of the sea and I wanted to mark the year anniversary since I found that awful tumor on her leg in some way. For me, that day is as painful as the day she died. I remember it so vividly. Finding the swelling and knowing deep within my own bones, even before the vets confirmed, that we were on notice, our journey's end.
Now don't worry. I didn't make a procession out of the day. No tiny hearse and marching band, flowery sprigs or wordy speeches. I simply popped her in my Highland Cow backpack, along with a book and a packet of biscuits.
We went to Forte dei Marmi which neither of us had ever been to before. Students often talk about it as being a playground for the rich so it was an obvious choice for us. I have to say though that the train station gave no impression of gold-paved streets: tumbleweed, graffiti, the smell of damp toilets. When I stepped out of the station we were even more disappointed as were not even able to glimpse the sea. 'Nevermind,' said Three Paw's bones - optimistic as always. 'Let's go see it anyway.' 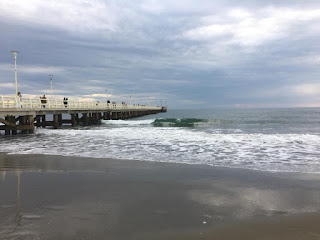 One hour later, after walking along a pretty miserable stretch of industrialized road, we finally reached the shore. I felt a little frustrated because by the time we sat down and took a few sniffs of the air we had to start heading back for our train.

I have to say that the town was very nice. In the end. Pretty, paved, boulevards flanked with Gucci and Prada. - all my usual shopping haunts. Behind it was a backdrop of snow-ladened mountains so it really was a far more idyllic place than the trains station had led on. Perhaps this was part of its plan all along -  deter all the plebs except for those with determined sneakers and bones in their bags. 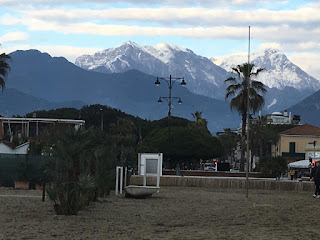 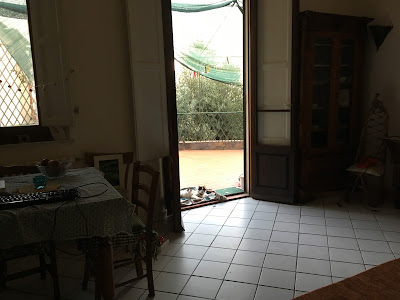