If you want to hear my story being narrated by...um..me. You can do so here. 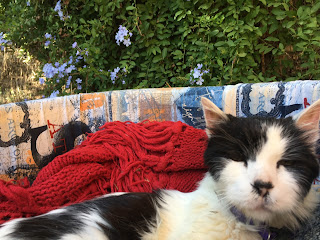 I recently received news that Three Paw will appear in one of the 2018 calendars for tripawd animals. Bittersweet news but the calendar raises money for a good cause which makes her story all the more worthwhile.  You can look at her calendar here Three Paw calendar

I started to clean out her summer house today so I could convert it into a winter house for one of my randaggio (strays). I found a small chunk of tumour she must have bitten off her leg months ago. I'm glad we got rid of that and she had those months of sun :-)
Posted by Joanna No comments:

Yesterday an old teaching friend of mine wrote to me from Istanbul. He told me how he had been thinking about Three Paw ever since he heard the news.
How every time he saw a cat, he thought of her too.
And how she was such a strong spirit,  he could feel her presence, even in her absence, all the way over in Istanbul.
And how we can't be without Three Paw because she is always with us, and in our senses; hopping around, beating the odds, and standing against anything that comes at her with her iron grit.
He said if he could feel her presence and I could feel her presence then she would always be with us just as light is during the day and the darkness is at night.

The moon and the bones 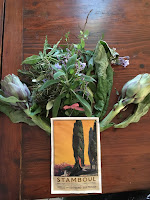 This morning I got up just after the sun and went into the garden. It was a beautiful, crisp morning; the thunderstorms from the previous days completely washed away. I tried not to hate it for its beauty; for being so buoyant amidst my grief. Pirate ambled alongside me and together we picked flowers for Three Paw's cremation ceremony later that day. Actually, we didn't pick many flowers. It was more the different trees and shrubs that our girl had so loved to lounge under and sniff with her little nose. I wanted her to be redolent of her treasured garden as I let her go today: rosemary, olives, lemon.scented flowers.

At 8.50 a taxi came to pick me up. A friend had offered to take me but I didn't want to sit in the car, putting on a brave face to make them feel better. I wanted to be able to feel whatever hit me even if it was nothing at all. The taxi driver, Antonio, commented on the mountains and how the snow had returned. I remember the snow leaving back in February. 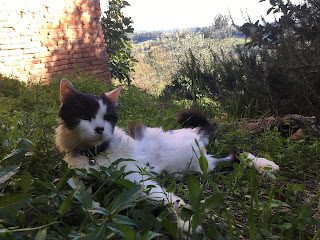 Three Paw was waiting for me at the crematorium. Just where I had left her - on a beautiful soft cushion with a toy mouse Pirate had left her, some flowers, and a letter. I took her into a private room. In my mind, I had imagined it would be some sort of prison cell set up with a metallic chair in the shade of wilted lettuce and damp, grey walls. I don't know why. Of course, it was nothing like that. It was a beautiful bright room full of candles and quotes about pets on the wall. There was a comfortable couch..the type that swallows you up whole, and I took Three Paw in my arms and we lay there together. I read her a poem, a little prayer, and a card I had written her. I also put a few drops of Raki on her fur to ackowledge her Turkishness. Then I talked to her all the while as she lay resting in my arms. My face pressed against her cheeks, her head, her odd hairless ears. After a while the words just fell away and it was just we two, as it always was, stewing in each other's souls.

Luca, the man in charge came in after about 40 minutes and said it was time to let her go. I arranged a couple of artichokes next to her ( so now I really can say she has gone to the artichokes), a card with some photographs, and a little clutch of flowers. I kissed her and I hugged her and I told her in Turkish how much I loved her.  I called out to her how much I loved her as he took her away.

Then I threw back a little Raki - medicinal purposes you understand. 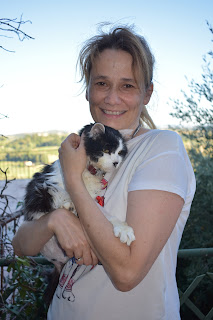 Now for some people the whole idea of cremation sounds like something you do but don't watch but for me, it was important to be there every step of the way. I  had always promised her I would never leave her and I wasn't about to now. Luca doesn't actually let you into the room where it happens. probably afraid a person might try to leap in or something but you can watch on a screen from the couch in the room. So I watched as he lay her precious body down and I watched as he gave her the cards, the artichokes, and the flowers. And I watched as how every time he bent over to lovingly tend to her all I could see was his own moon brought about by low-slung trousers and a shirt that was too short. I remember smiling and thinking how absurd life can be.

After an hour the cremation was complete and Luca came in to inform me that it wasn't like the movies. The thing is I don't remember a cremation scene ever being in the movies so I told him not to worry and that I didn't have a Hollywood story in my head. Basically, he was trying to warn me that when they remove her from the oven she isn't going to be tiny little ashes like you imagine she might be.
Did I want to see her come out?
Yes, I replied.
And here is the thing. This is when you know what love really is. Because as he respectfully brought her out - his moon now tucked away -  all I could see were her bones and how beautiful they were.  Neat,  little, snow-white things, each one of them perfection.  All part of the glorious infrastructure which had carried her both into and out of my life.

And I treasured every little bone, every single one of them.

A few minutes later he brought them in, now much smaller, and they were sealed in a bag which he had then arranged into the shape of a heart. They were still warm as I pressed them to my own. We then put them in her little box along with pirate's toy mouse, her collars and another letter. 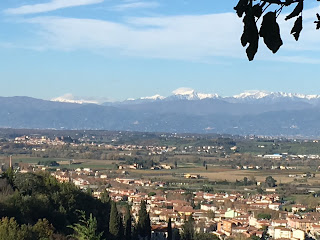 I decided to walk home which was quite some distance but I wanted to carry her there. I stopped for a prosecco on the way, to toast my little girl,  and then together we wended our way along a road past olive groves and vineyards. In the distance, I could see the mountains with the snow on them again

Winter was coming home and so was my beloved girl.

Ataturk died on the 10th of November and every year at 9.05 the country grinds to a halt to remember him. I feel it only fitting that she should be honoured on this day too. Not that her and Ataturk have that much in common ( she was always very nice to the Armenian film director who lived next to us in Istanbul) but for me she was a great Turk like Ataturk was for his people. 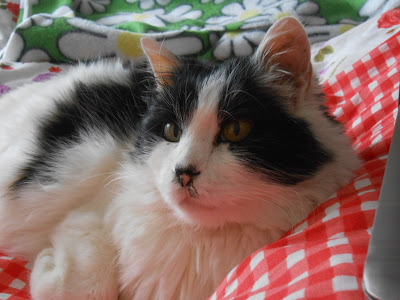 Gone to the artichokes 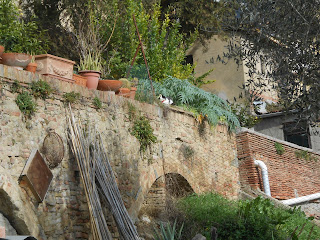 There have been times over the past two years when Three Paw would disappear into my neighbour's garden and lounge under the artichokes. I could never understand why she did it when she had a beautiful, sprawling garden of her own but she was a street cat I suppose - a wanderer by nature.

Now this garden she went to wasn't even the one next door and so the journey to get there was quite some feat on three paws. First, she had to navigate the increasingly complex impenetrada gate I would have fashioned out of wood and an old sun-lounger. I never saw how she got through it but she always found a way. Then she had to forge her way through a wild garden of brambles and bushes on a slope which even I struggled with. I never saw her do this either. ( An Italian friend actually asked me recently if Three Paw could teleport and now when I I think about it maybe she could.) Once she made it through the jungle slope, she had to climb through a marshy vegetable garden and then up a flight of steep stairs.

And yet somehow she did it.
And not just once. She even did it one time with the tumour on her leg. 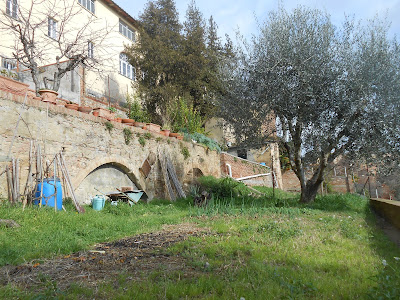 Every time she disappeared I would be thrown into a panic. Pirate would come running to the door saying ' Sheeeee's goooone' and we would begin our frantic search for her. Pirate scouring with her one eyes from up in a fig tree. Mostly  I found her under the artichokes or another bush but sometimes she was right up the top of the garden pottering among the tools.

I remember the time she disappeared for a whole night. Me traipsing through my neighbour's garden in my pyjama pants and a flashlight. She was nowhere to be found. At just after dawn, I returned home defeated and desolate. I lay on the sofa and reasoned if I just rested for half an hour I would find my energy again. Then about twenty minutes later I heard the jingle of her bell up my stairs and she arrived with a bound, inquiring about breakfast.

A friend and I have decided she has gone to the artichokes now.
Posted by Joanna No comments:

The words of others

“My heart has joined the Thousand, for my friend stopped running today.”
― Richard Adams, Watership Down 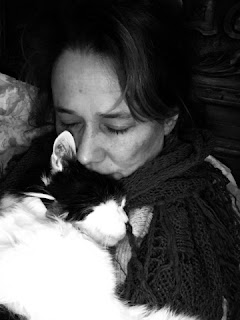 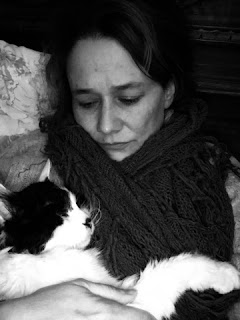 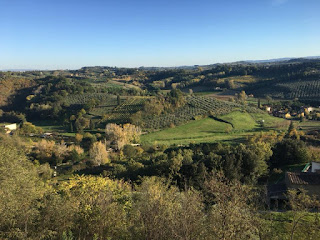 All Saints Day national holiday here in Italy today. The fact that I am so under-employed means that a public holiday doesn't mean as much to me except that when I woke up this morning I felt this legitimate sense of freedom; that I could spend the day relaxing in some way. I  ended up planning lessons anyway but it was for my group and I always find planning for groups enjoyable.

I have to say though that the weather has been sublime today. Really quite beautiful and I was able to cut through all my thoughts to see it from my back garden and bask in its splendour.

A good day in the end.
Posted by Joanna No comments: