Last night I dreamt that my bedroom suddenly started filling with masses of fluttering butterflies. They were bigger than usual and their bodies were warm and furry. They looked like little pets with rainbow wings. Later in the dream I released them into the garden and watched as they perched themselves on the treetops and the sloping ptich of the roof. It was a very nice dream apart from a sinister python who suddenly appeared in one of the trees and had very obvious designs on my cat, Ambrose, who kept escaping from inside the house no matter how many times I tried to lock him in. I actually woke up feeling quite exhausted.

Right now I am fighting a cold which I think I have been fighting for a few weeks now. It's funny but I feel absolutely dreadful but once I am 'on the stage' - as in teaching my adult monsters the finer tips of the English language - I feel suddenly better until the lessons end. Then I am aching again and my throat itches wildly.

Website is finished for now. Still in denial about the whole thing but at least it enables my beloved wise woman friend to indulge her penchant for cyper-stalking. Huzzah.
Posted by Joanna No comments:

You know it is interesting but ever since I started having stories published ( though this, I will be the first to concede, is still at a very embryonic stage ) the interest of people close to me seems to move from the publisher to reviews. As if it isn't enough that I have found a publisher who likes my work enough to publish it I now have to count the validity of my work in terms of whether it has been reviewed and if so how did I fare. The heartening thing I have discovered is that of the few reviews I have had ( good or bad) they don't seem to have affected me in the way that I feared they might.

Take the two following reviews about my short story 'The Moonkeeper's Friend'.

The first one is on the Amazon website by a customer (http://www.amazon.com/Clockwork-Phoenix-Tales-Beauty-Strangeness/dp/1934169986) and I am particularly grateful to them for taking the effort to review a book when it is of no gain to them. In their review they list my story as one of their 3 favourites, stating " Joanna Galbraith's "The Moon-Keeper's Friend" is a charming tale of two friends that brings the fantastic (and the moon) within man's reach."

In the second one (taken from the GreenMan Review http://www.greenmanreview.com/book/book_allen_clockworkphoenix.html) the reviewer is less of a fan , stating "Joanna Galbraith's "The Moon-Keeper's Friend" suffers from an identity crisis, veering from fairy tale to social commentary to magical realism to parodic ludicrousness. While some of her language is lovely and the premise intriguing, this story ultimately falls flat." Wow you'd think that would hurt but the interesting thing is it doesn't (ok may a little bit.) Largely because I think the reviewer is right in the sense that the story has many identities ( but I suspect many of my stories are like this - and it's why I sucked in my previous incarnation as a legal officer since I never seemed to be able to tell a straight fact). Also, the reader found the story fell flat. Fair enough - the thing is for every reader who likes the story I will probably find 10 who didn't and I can live with that. It's what makes us all individual. I think I would have been more bothered if they had referred to my writing style as 'pretentious, insincere, or overly flowery' but the fact that they found it lovely lessens the sting I suppose.
But what if they had torn apart my style as well?
To be honestI think that would have hurt more. But at the end of they day I feel as long as I can look at the end result and feel that I have been good to the language and written prose which is thoughtful, honest and elegant then whatever follows in reviews I will be able to handle in the correct way. Take on what is constructive but let go of what is not.

I haven't felt the urge to write anything here for the past week as I think I have been largely preoccupied with other things. Some of it personal stuff that I wouldn't want to share/ bore anyone with anyway; the rest has been an overriding sense of melancholy directly attributable to the terrible fires in Victoria I suspect. I have found this unfolding tragedy very devastating and I feel a strange sort of connectedness to the country I was born in at this time. This feeling of connectedness is not something that I am that familiar with as I have always felt an emotional gulf between myself and Australia. But seeing all those people and animals suffering so tragically makes me want to cradle my country in my arms and find some way to soothe her.

On a completely different note I am pleased to report that the story I wrote called:"Courtship, Cutlets and a Barrow Full of Dung" has been accepted for publication in the New Zealand magazing Semaphore (http://www.semaphoremagazine.com/). The story is set in a fictional Australian town about 75 years ago and tells the tale of a man's rather unothodox attempt to woo his beloved. It's a very Australian story I suppose and I feel glad that it has found a home at this time.
Posted by Joanna No comments:

Today one of my favourite students reminded me why I love my job as an ESl teacher so much.

When I asked him how he was, he replied in a glum voice: "Terrible! I've been picking at my pickle."
"Your pickle?"I said puzzled.
"Yes," he replied quickly. "And you should see how it looks now."
He then lifted up his head to reveal a red bump on his forehead.
"Um I think the word you are looking for is pimple," I said trying not to laugh too much.

I have almost, kind of, finished my web site. Well, the first version anyway. It is now being vetted by D, my most trusted nerd eye , so I will wait his analysis before I go any further.
Posted by Joanna 1 comment: 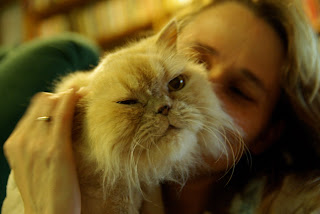 Today is Ambrose's birthday and even though he is not with me anymore I still feel it is important to celebrate him.
He may be gone but this will never change the fact that every 4th of February will be his birthday and I shall be grateful for this special date as long as I live.
Posted by Joanna 1 comment: 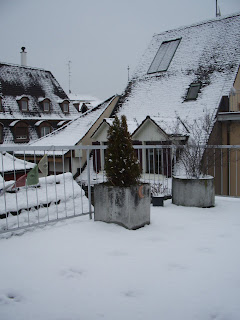 Schnee has returned to Basel again.

This has been the snowiest winter I think I have ever known here. Normally Basel tends to repel snow with its great hulking pharmaceutical chimneys but this year the weather is saying 'Nein' to drugs and coming anyway. Huzzah.

The snow is so thick in some parts I believe I could even legitimise the throwing of an apres-ski cocktail hour in my living room after work each day. Surely the slipping and sliding I do out on the streets is akin to skiing ( my standard of skiing anyway.)

Contract signed for Clockwork Phoenix 2; website still being built; ESL lessons for the week planned - I am a human machine.