I have been amusing myself today by pondering how Switzerland can name amongst its most treasured dishes - the wurst. I mean really how can anyone eat something called 'wurst' and possibly enjoy it. I even let this fact entertain me for a good hour today as I walked beside the Rhine watching people at various stages of wurst digestion. I have decided that bier definitely helps. Perhaps they should rename bier best to go with the wurst.

I don't seem to be able to write at all right now. The interesting thing ( or perhaps it is troubling) is that I don't seem to care either. Perhaps I am story harvesting. Like a squirrel in autumn getting her nuts for the winter. Or perhaps I'm just tired and wordless. Maybe I have spent my yearly vocabulary trying to explain the present perfect to the perpelxed and unwilling or perhaps my heart just isn't in it. Either way at least my dream life is rocking on. The other night I dreamt a giant unicorn had died in my parent's backyard. It was enormous. The size of a dinosaur. It looked beautiful lying in the grass. Like a sculpture made from snow, glistening in the sun. It wasn't sad either. The whole back yard was filled with small folk ( hobbitty-looking I suppose) who seemed to have built this amazing medieval village behind the unicorn.

A walk through the blackforest

I was just talking with my sister on the telephone and she reminded me of my all-time favourite song when I was a crazy teen.

Honestly I have no idea why this song makes me so joyous. Or why it makes me walk like a happy German with bent elbows swinging by my sides, hair in plaits and high frolicking knees. I think it's the key change in the middle that gets me every time.
Posted by Joanna 1 comment:

This one goes out to the wise woman 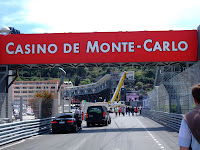 So I survived my birthday. By that I don't mean some sort of doom-and-gloom-oh-no-another-year-gone sort of survive I just mean I have made it another year. ( In Italian they say io ho X anni - which means I have X years. It is meant as a celebration - eg look how far I've made it so far!! Woo hoo)

At first I hadn't planned to do anything special to mark the day - but then at the beginning of the week I thought about going to Monaco/ Italy - mid-week I had a change of heart and decided I would prefer to hide in my bed - then on Thursday I decided I needed to get out of Basel and really what better place than the home of fast cars (for quick getaways) and pricey cocktails (perche non!)
In the end I think it was a good idea. Not only did I away from myself for a while ( so to speak) but I got to make friends with a rarver nice Ferrarri. In fact became lovers very soon after! 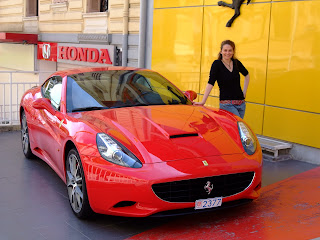 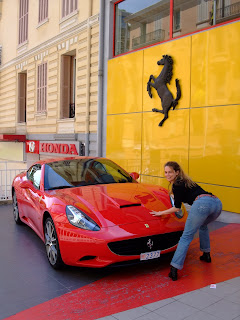 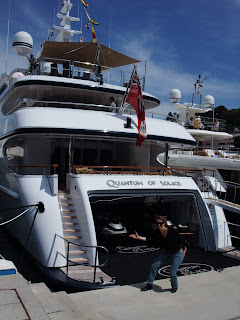 I also got to be a Bond girl.
Sort of! 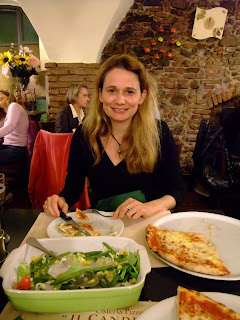 ( lots of arm gestures and vino!)


It was a nice birthday despite how topsy-turvy I have been feeling lately and for this I am very grateful.

Today I absolutely sucked at yoga. I doubt you are supposed to use words like 'suck' when talking about yoga but I am sure special dispensation would be granted to me for today. I was terrible. I had no energy, I kept grabbing the wrong foot, all I could think about was the nap at the end. I actually felt the need to apologise to Izabella (the teacher) at the end for my suckiness. Fortunately she has a yogic spirit and gave me such a beautiful smile I felt instantly forgiven for massacaring her art. I then went to visit the Russian cats who looked sort of (in a very Russian way) pleased to see me. Now I am making spag bog (apparently Shazza does not 'do' Tuesdays!)
Posted by Joanna 1 comment:

Well, it has been a grey, wet weekend in so I have spent an awful lot of time hiding in my non-grey flat. I went to see the Russian cats I am currently feeding, hoping for a bit of furry love but they both seemed in very cranky moods. (They are both grey too, you understand.) So I took myself and my non-grey aura home (apparently I have a fire-orange aura at present) and did some writing. Hooray for me. Not anything great you understand. If I was going to compare my words with a type of cheese (which seems the obvious thing to do when one lives Der Schweiz) I would say they had the consistency of cottage cheese. Quite crumbly and and not very cohesive but potentially quite pleasing as part of a bigger salad.

Anyhoo, I decided to do some work on a piece I finished late last year. By finished I mean it has a start, a middle and an end but even back then I knew it wasn’t the story I was meant to be telling. So I have dug it out again to work on and while the words are not easy for me at least some are coming. In fact so pleased am I that I managed to concentrate long enough to write for an hour, I am going to attach the first few paragraphs ( largely for my mother – and yes I am eating, my underpants are clean too! ) just because I can :-)

In Askhan’s main bazaar they say you can buy almost anything. Tea hand-picked by monkeys. Goblets made from goshenite. Bonsai kits for growing children. Porcelain teeth. Endangered bees. You can also find a fortuneteller who sees the future in cats’ paws and a man who makes giant cymbals out of discarded saucepan lids.

The bazaar is on a hilltop to the south of the snow-capped . The Peaks are high. They can feel God’s breath. Yet the bazaar cannot be dwarfed. Lofty and tall, cut from old mountain rock, it looms fortress-like across the whole of the land. Gloating at river beds that bleed dry below. Poking holes into clouds so they bruise, break and cry. The path to its gates is a hazardous climb; the Devil’s Intestine as it is commonly known. All folk who climb it will bear scars on their limbs though they wear them with pride, like wounds borne in battle.

‘Look I have no kneecap.’

‘And I no skin across my palms.’

‘Come my fellows there is no competition, I am missing both my heels.’

Fortunately all suffering is soon forgotten for one inhale of the bazaar’s breath is like an opiate dream. Pain becomes a welcomed friend; water tastes of wine. You can swallow the quavers of unfinished songs and sing them one more time.

P.s. For those who are wondering, Shazza's’s first efforts in the kitchen on Friday were excellent. (Even the designated canary appears to to have lived! ) Unfortunately however, Shazza is proving to be quite the saucy minx by refusing to do any sort of cleaning up. Apparently it does not come with in the ambit of Kitchen Sorceress, so it is up to me to remove the tomato stains from the ceiling etc


Posted by Joanna No comments: