Yesterday when I got out of bed, I heard a plop and the scuttle of eight feet. In Australia, this would be normal but I have to say I was surprised to find I had been sharing my bed with a spider of reasonable diameter. I have never seen one as big as it in Italy before and can't help wondering if it hitched a ride in my backpack from the Aeolian islands from which I have just returned. (Stay tuned for some adjective-laden posts about that amazing journey.) Anyway we parted company and I went about my dzay.

My next animal encounter was sadly of the deceased variety. A young, red squirrel dead on the road. He didn't have any noticeable injuries except one of his eyes had popped out but I presume he had been hit by a car. I couldn't leave him on the road to be smashed into the bitumen so I dug a grave by the road with a view of the trees. I sat with him for a while first and gave him lots of hugs. His body was still warm so it must have only happened recently. If only I had come earlier. I also played him some James Blunt because if anyone is going to make an animal suddenly wake up and run, it is probably him. I say that with love, of course. I am JB's one fan.

Finally, in the afternoon I noticed Pirate was being quiet. Tooooooo quiet. So I went outside to look for her and found her staring at the back of lizard which was sticking out of a brick hole, its legs spinning like demented windmills. "Oh, Pirate," I said. "Let the lizard be." Anyway, I then looked more closely at the lizard and noticed that its head seemed to be twisted around, and its large black eye was staring at me. I thought it looked odd and it took me a minute to realise that it was actually a snake slowly devouring the lizard headfirst. Well, I know the snake was probably hungry but I couldn't just crouch there and watch this slow, tortuous death so I pulled the lizard out of the snake's mouth. The lizard promptly shed its tails as a thank you gift for me and scampered behind the brick. 'O, lizard,' I said. 'That's very silly. The snake is behind there, too.' So I moved the brick so the lizard ran away properly and then I saw the snake. It was quite young I think, very long with green and greyish scales. I am fairly confident it wasn't a viper but I still didn't like it having lunch right by my door so I gently invited it with a broom to head for the hills. To be honest, I don't think it went very far and is probably planning to empty my fridge and leave a note saying - See, how do you like having your lunch taken away!

Never a dull moment in this Tuscan valley, I can tell you. 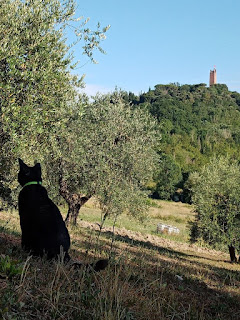 When I travel solo, I feel a great peace settle over my bones.  It's strange because in my everyday life I am racked with insecurities. I hate making decisions. I always fear a wrong choice and yet somehow when I become unshackled from daily life, I suddenly find myself becoming formidable and completely fearless. There are never any mistakes, only new directions.

Travelling makes sense to me in a way day-to-day life does not. And I'm not talking about flitting from one five star to another. I'm talking ramshackle hostels, broken-down buses, one dollar lunches, toilet paper in my back pocket, reading maps upside down. Everything that can make one day on the road feel like a lifetime.

I don't travel much these days.  Mostly I can't afford it but Covid-19 has also added a plot twist. But I have realised that I need to try and find a way to bring it back into my life.
Posted by Joanna No comments:

loneliness setting in
Posted by Joanna No comments:

Not a fan.
Posted by Joanna No comments:

I wish I had his gift.


Posted by Joanna No comments:

Another brick in the wall

Today the local newspaper had a four-page spread on the fall of the Berlin wall thirty years today. I found it very moving and could feel tears welling in my eyes as I drank my cappuccino. The Wall fell just as I was finishing school. We had just finished studying the Cold War in modern history. It was all terribly relevant. I don't remember watching any of the footage on television though. I think I was too immersed in my last exams to look up and breathe that moment in history. I love looking at the pictures though. That eighties hair and those knitted jumpers.  I think people are forgetting how sad that wall was. How divisions don't heal, they only hinder. 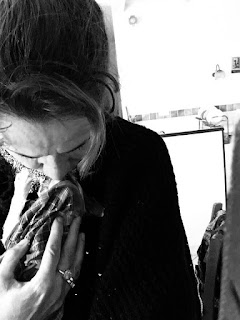 After my cappuccino, I went down the hill to collect a dead kitten. I had seen it by the road yesterday and put it up safely on a ledge but I knew in my heart no one was going to come and collect her. So I brought her home and held her in my arms for a while. I wanted her fur to feel loved even if she was gone. We then slow-danced to a James Blunt song. I figured his mournful warblings would be enough to make any creature happy they had moved on. ( Not really -I love that man and his mournful warblings.) Then I took my little baby down and buried her with Dude. It was raining heavily and everything felt very somber but I like the idea of the two of them being together.

Pirate watched, unmoved, from the stone stairs. I think she was pondering her next meal.
Posted by Joanna 2 comments:

The Day of the Dead 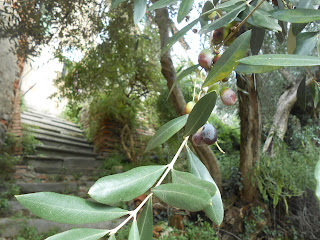 November 1st.  The Day of the Dead here in Italy. People visit the graves of their loved ones although this year I noticed a lot making the pilgrimage in the previous days because I suspect they wanted to make the most of a long weekend and jet off somewhere exotic. Well, maybe not jet but at least do something fun. Unlike myself, poverty keeps me housebound but the olives are ripe for the picking so I have spent some time in the garden in the shadow of Dude's grave. This will be my last harvest here. I feel nothing in particular about this fact. 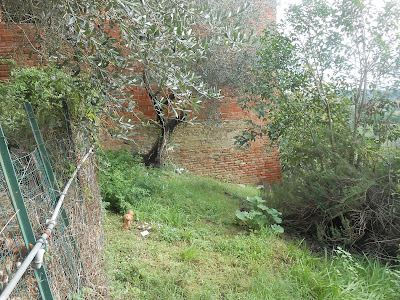 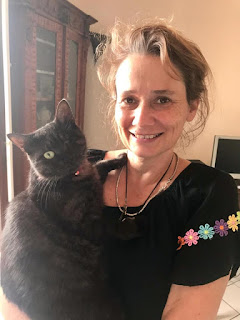 Happy 6th GOTCHA day ❤️😺to my shadow, my chatterbox, my rascal, my girl. I still remember the day with vivid clarity: grabbing you from beside the mosque tombstone: losing you behind my wardrobe when you tried to wriggle away: taking you to the vet where they said the infected eye would have to go” but don’t worry, they do ok on the streets with one.” I knew at that moment you would never see a street again.
Change is being foisted upon us and I know not where we will be this time next year but I do know we will be together, my beloved little Pirate 🏴‍☠️