A bird in the hand

Two lives ago when I was back in Switzerland, I rescued a bird one stifling summer afternoon. I thought it had no chance when I found it passed out on the bitumen but I picked it up just the same and made it a home in a little green box. Later that same day I took it to Elisabethenanlage Park, thinking it was dead, then when I opened the box it flew straight into the trees. I remember that moment vividly. Such an unexpected joy. The rest of the day was pretty miserable from what I recall but you try to remember the good stuff more than the bad.

Today I got to rescue another bird, and just like the last time I wasn't alone. This time, however, I had three feline spectators who were more than eager to offer advice, paws or jaws - whatever they thought best. Once again I thought it was dead, lying on its back in my corridor with Pirate in charge of triage. But when I collected it in my grey cap I could feel its heart beating although it lay perfectly still. I decided to lock my three 'helpers' inside the house while I went out to the garden to see if it could fly. Which is did beautifully, up up and away.

I often wonder what my life would have been like if I had stayed in Switzerland.
Better, I am sure.

But what then of Three Paw?
What then of Pirate?
Posted by Joanna 2 comments: 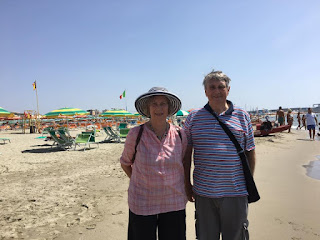 Last summer my parents and I went to Viareggio for a day trip. It was during the peak of Lucifero (the heatwave) so I remember the day being oppressively hot but pleasant, thanks to the sea breeze. We had lunch at one of the cute little beach bars that line the main promenade, had a paddle, and then in the afternoon wandered the Mercato searching for hats. Viareggio looks a bit like I imagine New Orleans to be. Streets on a grid, lined with colourful houses and latticed balconies. I have fond memories of everyone approving of the outing and mother, in particular, being taken by the market.

Now as winter draws to an end, I felt it was time to visit the sea again. I had been feeling low of late so I thought Viareggio might be the perfect tonic. 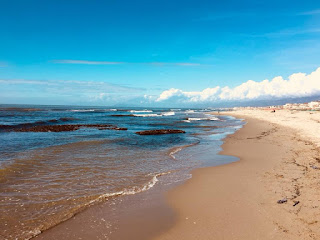 It was an odd sort of day. I started with a walk on the beach accompanied by a slice of Margherita pizza ( happy face.) Then I did an enormous faceplant outside a clothing shop (ouch face.) It even withered the jeans around one of my knees. Nobody helped me but a few minutes later a softly spoken shop guard from Nigeria asked me if I was ok ( grateful face.)  After, I went to have a cappuccino which turned out to be even cheaper than the ones in San Miniato ( score face) but then I could not work out how to shut the toilet door in the bar. It was a sliding door that sort of disappeared into the wall and the only way to open it was to stick your finger into this tiny hole. Anyway, the barista got very cranky with me when I couldn't work it out and stomped over and said in English 'OPEN IT HERE' and yanked the door open with his finger. I don't even know why he felt the need to revert to English since I had been very politely speaking Italian earlier. For some reason, his moody demeanour set me off in the toilet and I had a big cry - the type that makes your eyes soggy and your nose red  (embarrassed face.) Fortunately, after I left I had a very lovely encounter with a lady in a dress shop (thankful face.) She was selling these gorgeous, vibrant dresses in the Positano style. Things I would have loved if I didn't feel so (a) frumpy and ( b) had some leftover imaginary money. 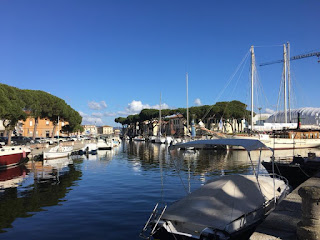 Finally, I made my way back to the train station and as I was buying my ticket this stern looking policeman came up to me and asked for my documents ( panic face.) I kind of looked at him blankly at first because I couldn't understand why he wanted to see them and then I realised I didn't have them with me anyway. I don't like to carry my passport around with me here. I mean seriously after 'football' I suspect 'theft' is the national sport. So I explained to him that I lived in San Miniato and for some reason this made him relax and he left me alone. I am not sure why he stopped me. perhaps I was channeling too much vagabondo and he thought I was planning to stay in Viareggio and let the place down.  Feeling bothered I went and sat on my platform and read a book until an elderly, toothless woman in a shawl came up to ask me about the book I was reading. She noticed the author was Polish so she wanted to know if it was a Polish book. I explained the story was written in English but by a  writer with a foreign name but this did not seem to satisfy her. Then she asked what the title meant. Now the book is by Marina Lewycka and is called' Various Pets Alive and Dead.'  She knew what pets were but she suddenly became very sad when she learned the word dead. I tried to explain it wasn't actually about dead animals ( well, not in the main) but I don't think this comforted her much. Anyway, my train rolled in on time ( miracle face) and I escaped ahy further interrogation.

I have to say I was glad to get home but I wished...there was someone waiting to give me a cuddle and decompress the day with.  Of course, I mean a person but Three paw would have worked too. 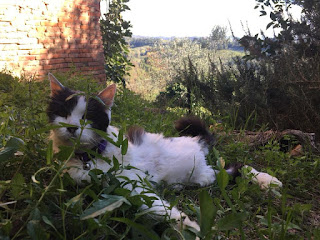 Pirate is still learning. She hasn't quite mastered the gravitas and empathy of Three Paw yet. But late in the night when I was crying ( Three paw and day-related) she came up to me, wrapped both paws around my neck,  rested her head in the hollow of my throat and purred. 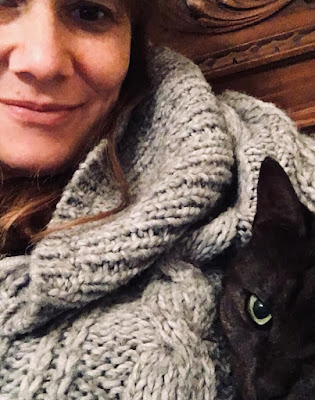 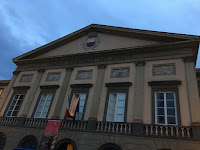 Every fortnight I go to Lucca to teach Film English to two classes. We have our classes in the library of the Giglio theatre right near one of the gates of the old town wall. It is a bit of a journey to get there (one bus, two trains) so one might question its worth but it is work and from its investment, other work may spring. That's the theory anyway.
I like the classes too because they are higher level students so we actually hold conversations. So far we have studied The Godfather, Stoker, and The Blues Brothers. The students enjoy learning the vocabulary from the films like 'piece of ass' so I feel it is time well spent. 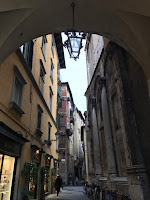 Lucca is a pretty town too with a rare, fully intact Rennasissance wall circling around it. I always arrive there a few hours early to factor in train delays etc. The first few times I wandered around the labyrinthine alleys but now I have started passing my time on imaginary 100 euro spending sprees. What would I buy if...this week I got a cook book called Facilissimo in which all the recipes require 6 or less ingrediaents, a new bra ( it has been 8 years), a cardigan and a green jug---AND I still had money to spare! So much fun. 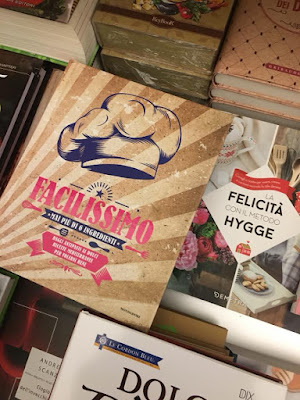 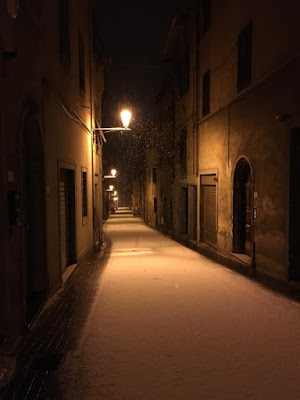 Italians are not the quietest of folk. Probably in the same way Londoners regard Australians as somewhat noisy as they yakityak on the tube despite the surrounding ( glaring) silence. Italians are noisy on the bus, on the train, in the street; even their shoes clip the pavement in a more sonorous manner. I don't even know if there is an Italian word for 'whisper'. Actually, probably sotto voce but that undermines my point. Italian are loud. Period.

Ah, but not last night. Last night the streets were silent. Quietened by the snow. Not a car whizzed past nor voice sang out ALL night. I know this because I was awake for a lot of it. Finally, I got out of bed and looked out onto the street and saw how beautiful it was. So I went out and it was just me and the street and the night all whispering together.

I wasn't actually the only person who was up as it turned out. Sergio, the retired butcher, who lives down the road was up from 3.am watching the deer and the wolves running through the valley below. The reason I know this is because I have recently started teaching his daughter and we ran into each other later the same day; not because I am spying on the butcher in the after hours.

I did not know there are wolves in the valley.
I am glad the artichokes are up high with me.
Posted by Joanna No comments: