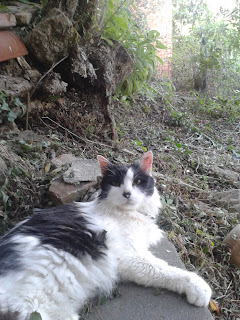 You know I am very mindful of this blog not being about only my cats. Much as I love them and they are my family here, I hate it when I only get sent cat gifs or cat stories like I have no other passions. So I have to be careful not to feed that narrative but today is not one of those days because today I feel Three Paw must be celebrated.

You see this time a year ago Three Paw was admitted into intensive care with a series of illnesses that were never fully explained except via an impressive dent in my wallet and a gaggle of grey hairs. The lack of a clear prognosis was probably not aided by one of the vets giving her a dog test for panleukopenia instead of a cat test which meant the results were inapplicable anyway. What I do know though is that it was a problem with her pancreas and her liver as well ( she was always a bit heavy-pawed on the Raki), possibly brought on by an infection.

I ended up leaving a new job just so I could nurse her and spent the next seven weeks feeding and medicating her by a tube five times day. I remember wondering at the time if I was doing the right thing. Was I making this animal suffer because I couldn't bear to let her go. But she always used to look at me straight in the eyes and I knew I could read her and that she trusted me as well. I was plagued with self-doubts but I felt in my heart I would know what to do or she would tell me somehow. And even though she couldn't eat, her body never rejected the food. She always took herself to the bathroom and every night she rested her paw on my chest.  All of the time whispering: 'Don't give up on me just yet.'

A year later and I know I did exactly the right thing. Just watching her today ambling in the garden, with florets of purple flower-heads caught in her fur. Eating both breakfast and lunch, purring when she is groomed.  She is much frailer now, and who know how longer we will have together, but we weren't meant to give up back then and she made that very clear. Besides she would never forgiven me for not giving her the chance to lie under olive trees and chew on sweet grass.

Most of the time I wish I were still in Istanbul but the one thing I know is that if I had stayed, she would not be here. 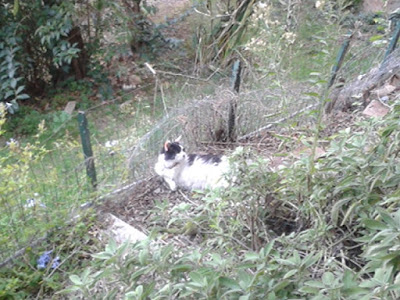