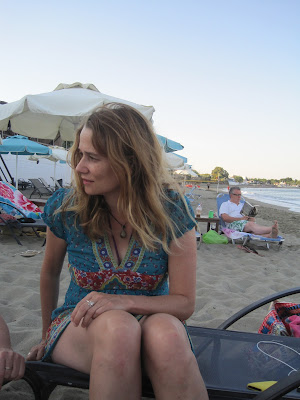 I’m beginning to find my swing now. That’s not to say there aren’t times when I don’t feel despair but there are times here when I laugh and laugh and laugh. We had a game of Mafia last night under the stars. Lots of gruesome deaths -  I can't remember many of  them now - but I know that A (one of the staff on the island) was stuffed to death with scones. He actually bakes the most beautiful scones so I think that could have been a very lovely death. It was a wonderful night though where conversation and wine flowed with joyous abandon.


Apart from laughing I seem to be eating for the entire island. I think I have eaten more here than I have for the past six months. Feta cheese, filo pastries; bread; cucumbers; lentil soup; black-eyed beans; lokum; peaches; apples; potatoes; spinach – how’s that for some concrete nouns!
Writing class continues to challenge me – but in a good way.  Have even written new descriptions about one of my characters – Philomena Philpott – that I hadn’t really thought before.

I spend quite a bit of time on the beach too!! 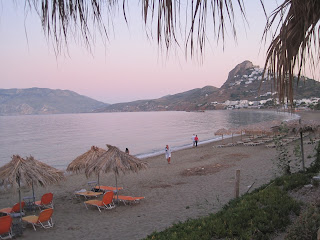 It's quite rare in life to have a gang of friends you can just spend the afternoon with swimming, chatting and discussing important topics such as where to have dinner.  I'm not really a lie about by the sea kinda girl but the people here make it so much more interesting - as does a glass of rosè wine and chocolate ice-cream. (There I go with the food again.)

I have decided to stay on in Skyros after this course ends. I had planned to go island-hopping around Greece but I think there are probably enough places for me to hop between just on Skyros itself: beach – ice-cream-bar-beach-bed for example. I also feel safe here physically and emotionally and it’s good to feel safe for a change.
Posted by Joanna

JJ
I hope you are well! I really like how you put a picture of me with the caption of 'Evidence of Wine Flowing'. I feel quite honoured.
Hope to see you soon.
Dave xx

Plus I need to know what happens to Didi... xx