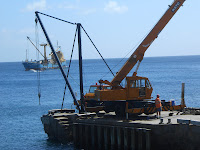 As promised, today we started with a visit to the Norfolk Island version of man-land ( a.k.a. Cascade Bay) to watch the freight ship unload its cargo onto the shore. There isn't actually a port as such on the island and so they have to use enormous lighters made from Norfolk Pine to carry all the goods from the ship to the shore. Many things come to the island this way: all cars and heavy machinery, electrical goods, horses, oil, Christmas cakes...It is an oasis of grit and steel.

Now  - before today's unloading began, I decided I ought to inspect the lighters for seaworthiness. Something which is best done by getting one's sister to assist in the elevation of one's dad to look inside the boat. 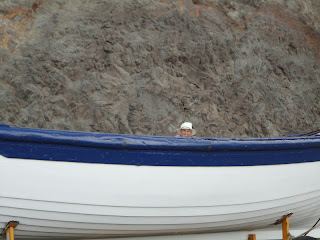 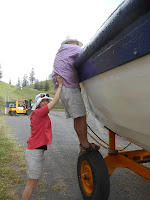 Dad reported the lighters to be in satisfactory condition and filled with an 'intestine's worth of ropes.'
Lighters inspected I then did my best to get the boats down to the shore for the men! 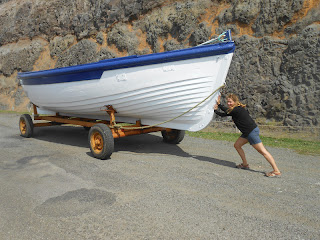 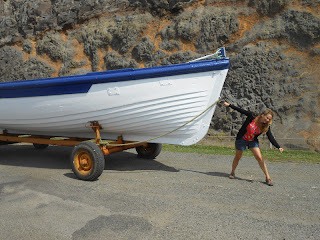 Job Done - the unloading began. It was very exciting and grunty. (Tomato handbag would have loved it.) We sat on the rocks for ages; watching the lighters head out to the ship, seeing them load up then make their way to the shore where they were craned onto the mainland by men with big arms and no helmets. Mum and I could have stayed for many hours but then dad declared himself to be bored (which was rather unmanly of him I thought.) 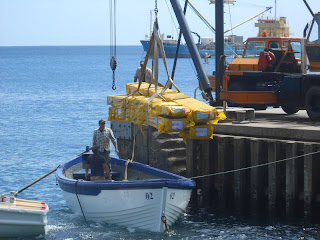 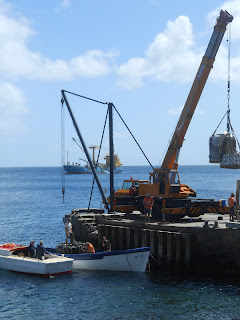