So it was a noisy first night of sleep on Norfolk Island thanks to a beauty pageant going on at the community hall next door. I have no idea who ended up winning the pageant but given the potentially limited gene pool (pop: 1500) I would say there were some pretty close calls. Despite my  lack of sleep it was still nice to hear the islanders enjoying a night out on the tiles - the island, from what I understand, is going through some fairly bleak times financially so a little beauty and booze should always be applauded. 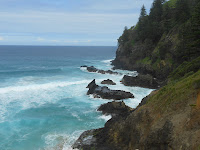 Anyway my mama  decided that our first morning on the island should be spent climbing down to (and then later up from) Anson Bay. It is an absolutely gorgeous bay to look at although a local nearly died there last week rescuing his daughter from a swell. (I listened to his exciting account of heroism this afternoon.) We were much more placid in our jaunt to the bay though. 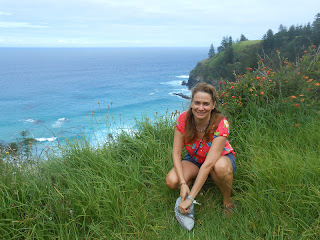 We also visited Captain Cook's lookout where there is a memorial plaque to note his first landing on the island. This is a good place to see birds such as turns and masked boobies ( heh heh). 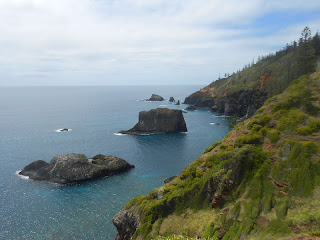 In the afternoon we went on  an arranged tour of the island where we took in such sights as:


Bloody Bridge - named (rumour has it) because once upon a time some convicts decided to paste the body of a murdered officer into the walls of the bridge and later it turned red because all the blood seeped out. Of course there are much more mundane versions of the bridge's origins but I'm going to go with convict story for now. 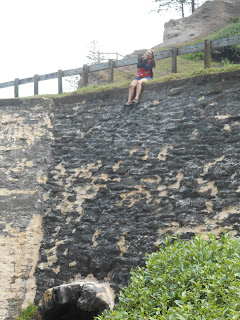 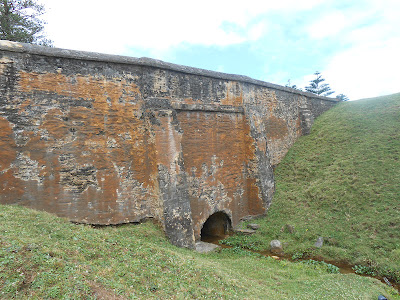 We also regarded the island from Queen Elisabeth's look-out where we saw the remnants of the penal settlement and a low sweeping view across cemetery bay. 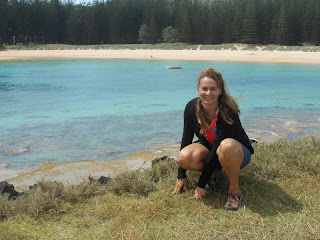 Also Cascade Bay which is the point where the boats come into deliver goods to the island.  Excitingly there are reports that tomorrow there will be a boat ( they only come in once a month and we can all go down and watch the unloading.) Bob the builder eat your heart out.. cranes, trucks, front end loaders...man-land central I do believe. 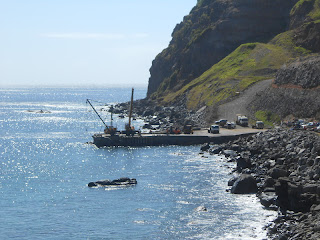 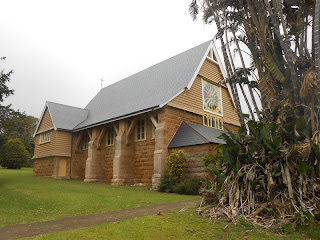 Finally St Barnabas  a pretty church with an inside roof in the shape of the hull of a ship.  There was also a lovely herd of cows watching nearby as well.   Actually there are cows every where on the island. No bells on their necks like in Switzerland but these beasts have complete right of way. I think the fine is 5000 dollars if you accidentally hit one. They have grids near the town to stop the cows ransacking the shops although apparently the odd cunning  cow has worked out how to roll over the grids...Of course the lovely feral wet hens can go anywhere they want.