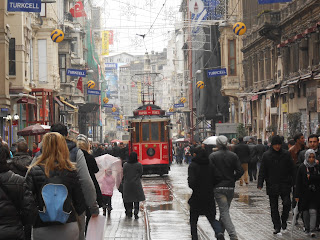 It is hard to believe that I have only been in Istanbul for one week. It feels like a lifetime. Honestly if I ever meet someone who thinks their life is passing them by too quickly İ am going to suggest that they uproot themselves to a place which is the complete opposite of where they have come. That should slow things down nicely for them.

So what have I done so far you may wonder...

Well, I finally moved out of my stinky cesspit hotel. I was beginning to worry I might start to smell like it too since none of the water ever pointed downwards in the shower. It much preferred to point itself at the un-closeable door and the carpet behind it. 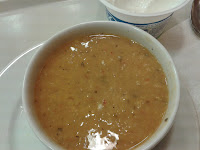 I have eaten enough lentil soup (mercimek corbasi) to cause a world shortage of lentils.

I have got myself a tax number from an uber-friendly tax office. Truly I wanted to spend the day filing for them because they were so kind to me.  In a city of 16 million there are a lot of unfriendly people.

I managed to finally register my telephone after a week of red herrings, misdirection and general unhelpfulness.  In Turkey it is compulsory for you to register the phone otherwise the government blocks it but they seem very disinclined to actually help you register it. 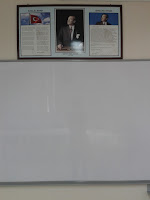 I have taught under the watchful of Mr. Ataturk. (Probably watching to make sure I don't sneak a Fez into the classroom.) My students ( all female) were, in the main, very nice. They all tended to ask a lot of personal questions, told me to 'trust no one' and said that the best thing about being married is you don't have to worry about the bills.  A couple of them were at the American Hospital and one of them very sweetly took me onto the roof of the hospital after the class to have tea at the staff canteen. The view over the city with its topography of minarets and tower blocks was spectacular and and it was good to be reminded just how big and mean this place really is.

I have not really enjoyed my first week here but I have survived it on a physical level although my heart and soul feel quite shattered.