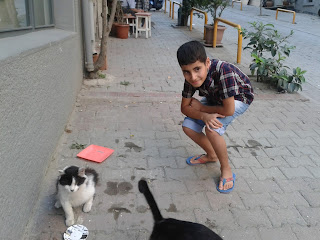 Today something rather delightful happened to me. I could hear one of my babies ( I have mother-cat ears now I have been officially bagged) calling out on the street so I went out and found my little black cat friend trapped between some fly wire. As I was letting her out a little boy approached me to watch the operation. After a while he started chatting to me. He told me how he had seen me feeding Three-Paw the night before and how beautiful she was. 'She is too beautiful,' he said. Anyway the little boy and I started talking and he said he was an Iraqi on holidays in Istanbul with his family. His name was Danny ( a curious name for an Iraqi) and he was leaning Arabic, Kurdish and Syriana at school. He wanted to know if I was here with my mummy too. Then he started telling me how much he loves animals. ' Too much' he said again. He told me about his pet fish, his pet bird and his puppy called Bobby-Rocky. He also gave me a gruesome side story about how his last dog fell out a window and then demonstrated a number of small explosions which were supposed to be the poor dog's head and tummy. ( Arabic folk never shy from such details.) He looked sad as he told the story so I asked him if he liked cats and he said he loved the cats in Turkey. Then he asked me about Three-Paw and I told him her name was Melek which he understood. 'What a beautiful name for such a beautiful cat.'
Later he met me at the door to help me feed Three-Paw and the little black cat. He was so happy to hold their plates and watch them eat. He kept sighing and saying how lovely they were. As we talked he began to mention home more and in the end I found out he wasn't actually Iraqi born. He had been born in Syria, out in the desert, but his family had moved to Iraq some time ago so in his head he was an Iraqi.
Later I took him to meet all the other cats and he thought each one was beautiful. Even the one with the collapsed ear and the other with a face full of snot.  I loved passing the evening with this little boy. (Although Anil, my thirteen year old Turkish neighbor, snubbed me. I think he thinks I've found  a new boyfriend!)

I have realized that in Istanbul I may be a lonely person...but I am never alone.
Posted by Joanna