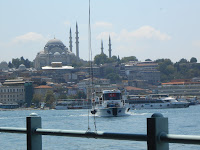 Z is back. A break from filming her Kurdish comedy ( I am agog to know what such a genre entails except I can't understand any of her explanations. But she assures me it is 'very funny' 'Oh so very funny.') Anyway she asked me to come have breakfast with her ( which is the first time she has ever asked!) I think Nurdan's offer yesterday to go cycling with me in Belgrade Forest has ignited some sort of territorial war within. Funny thing is I am the worst sort of prize. I am a recluse and a hermit at the best of times and right now I wouldn't say I am at my best at all.
Anyway we decided to walk down to The Bosphorus  and eat kahvalti under the Galata Bridge. It was nice. There were young boys leaping into the choppy water, men fishing and Z knows how to send back stale tea with a very impressive bat of the eyelid. 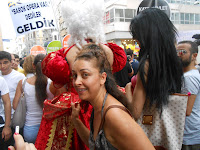 After we went to a charity shop where Z had previously donated a lot of her clothes. She'd had a change of heart in the meantime and had gone back to retrieve some more of her more beloved ensembles. I write this all with a smile on my face.  The whole day amused me and being amused is good. When I got back Three-Paw was practically chewing off her other paw and the men next door were shouting to me 'yemek yemek.' They explained that they had tried feeding her but she wasn't interested. I think her diet of fresh Whiskas packets is beginning to spoil her.
Posted by Joanna