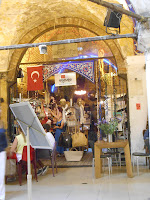 Today I decided to walk to Laleli Cami ( Tulip Mosque) over near Beyazit. There was no deep reason for choosing to go there I just wanted a walk with a purpose and I had also read that there was a very nice olive oil shop attached to the Mosque. I began by walking down along The Bosphorus, past the moored cruise liners the size of volcanoes spewing out sea-legged passengers, and then down some side streets which were filled with quirky little coffee shops I have never seen before. I decided to walk with a can of cat food in my bag to treat any passing waifs of which there were plenty. ( I really hadn't planned to become a 'cat-woman-of-the-non-latex-suit-type' for a few years yet but life in Istanbul seems to have accelerated the process somewhat.) Anyway I crossed over and made my way up to The Grand Bazaar. I had a hankering for the bazaar, more for its smell than anything else. A nod to Syria I suspect after my dream of camphor and sweets. 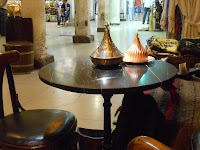 The Grand Bazaar was very quiet for a Saturday: Ramazan and Taksim troubles - the main culprits. Bad for shopkeepers great for determined walkers on their way to Laleli Cami. I actually ended up pausing in a cafe for a drink and a bit of crowd watching. I am very mindful of drinking and eating in public during Ramazan ( I just don't do it) but the coffee shop was crowded with locals and tourists drinking tea I decided it was probably OK. Actually I have noticed that the men on my street seem to be drinking and eating even more than usual on the street right now. A Turkish woman at work suggested it is probably a reaction to the conservatism that has been creeping into Turkey of late. 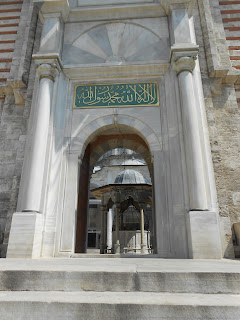 Anyway I finally made it to Laleli Mosque in the mid-afternoon heat. There weren't many folk about. A few people oruçing under trees and some children running around the outside courtyard. I decided to go inside the Mosque so I found the lovely main entrance with its grand arching doors - only to see a sign directing women to a boxy little passageway to the left. I don't know but something inside me very quietly ( and serenely) flipped. Why can't I walk through the main entrance? Why must I walk through a side entrance into God's house. Surely we should all be able to walk together into such places. ( And don't get me wrong I feel equally annoyed that their are no female priests in the Catholic religion and no female bishops in the Anglican church.) But suddenly I felt no desire to enter the Mosque at all and it annoyed me so much I even found the attached olive oil shop less alluring than I might have otherwise. In the end I stalked back up the hill, through the Grand Bazaar, across the Galata bridge to my street where I gave Three-paw a pat and poured myself a glass of wine.
Posted by Joanna