Tonight when I came out of the metro station I heard playing some of the most beautiful music I have ever heard. I don't even know what the instrument was but the music had this thrillingly exotic rhythm to it. Like something quite magical was about to descend on the square. And I suppose it was for we were only minutes away from Iftar ( the breaking of the Ramazan fast.) People were milling about, some children were dancing, and all these white tables with white cloths were set out across the square.

White tables where white gas had blown just days before.

I wanted to stay but I was weary ( after being locked out of my house since 6:45 am - a story for another time) so I went down to my home and promised myself that another night I would come up and enjoy Iftar under the stars.

I did bring some Ramazan Pide home though to eat with kaymak (clotted cream) and honey.

The first Iftar was actually yesterday and apparently there was an amazing scene up on Istiklal Street. Friends and strangers had built  long picnic lines all the way down the street and were sharing food together. A student told me about it today and she said she got goosebumps just imagining the scene. I did as well.

I hope another night I will see it for myself.

They even ate amongst the water cannons...or Toma's as they are known. 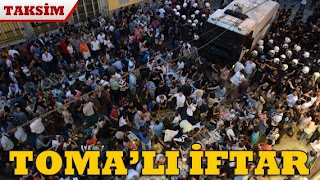 There is a part of me that wishes I had a real Turkish friend to share the experience of Iftar with. To understand more about it. But I did get a visit last night from two thirteen year old boys who live on my street that I have got to know. One of them is called Anil ( Ok I am really going to have to find out the pronunciation on that one) and the other is called Batu. They have opened a little store on the side of the street where they sell junk and dvds. Anyway they came to me door last night bearing a bowl of popcorn and sunflower seeds to share with me which made me laugh..but was kind of cute as well.

Take your gas mask and go out walking! You are in this place at a (tragic, but) extraordinary time...