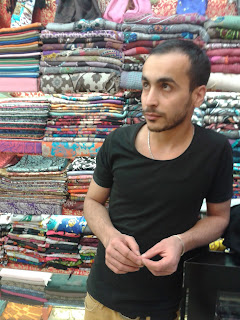 This is Samir.
He used to sit in the shadow of the Omayyad mosque, drinking tea while talking to passers-by. He had a small shop but most of the time he was perched on a wooden stool under the large creeping vines, laughing with his friends...with strangers as well.
Samir lived in a ethereal place that smelt of jasmine and apple nargileh and fresh baking   bread.   He was curious about foreigners but always kind and gentle and full of good humour.
Now he is in Istanbul and when I visited him on Saturday at the Grand Bazaar he seemed very depressed. I had visited him a little while back and he was worried about his home but now he seemed resigned. Maybe the correct word is hope-less.
He was without hope.
And he wondered why everyone hated Syrians so much. And he wondered why his Arab neighbours weren't trying to help. And he wondered why the world didn't care how many Syrians had died. And he wondered what the Syrians had done to be so unloved.
By the end of our conversation he had found a little more energy I thought. Not because I am special and brought amazing healing powers but because he knows that I remember the Damascus that he loved so much. Sometimes talking about the things you love helps even if it hurts as well. It gives them breath again and what Damascus needs right now is breath... lots of it. And yes, I said to him, I remember how kind the people had been. How generous and helpful they had been..to me..and to each other. And yes I had loved his country in a way I can't describe and he should love his country still even if he didn't know what it was anymore.
I know his life here in Turkey is not easy ( actually whose life is easy in Turkey I wonder.) Turks have a general distrust of Arabs which they express quite openly and with the war on their doorstep they  are understandably quite apprehensive. But it is no reason to treat him like he is lesser than anyone else. Or anyone else for that matter.
Tonight I am going to share Iftar with him and his flatmates. ( I live in Turkey but I pass Iftar with syrians - interesting!) The funny thing is one of his flatmates is a man called Ahmed. I knew Ahmed from Syria as well.  I knew him independent of Samir. He helped me find the family I stayed with. We used to go out for coffee and sometimes wander the streets at night. 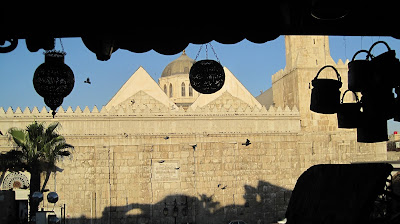