Before my accident in May I was doing quite well at deciphering Turkish words. I was trying to learn verbs and understand how they conjugated and I was beginning to recognise some simple phrases. Post head-bang, and I lost the will somehow.
I also used to spend my weekend going on adventurous ambles through the city, trying to uncover new things, and  I lost this will as well. Now almost 2.5 months later (and still no money back from school's health insurance company - what a surprise!) I have realised just how horrible it was. A constant diet of painkillers, anti-inflammatories and mushy food because my jaw simply would not open nor close for that matter. Only now as I feel better do I realise how bad I felt. 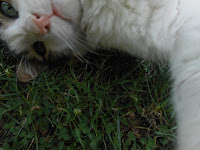 I have even started some weekend ambles again. Largely over Grand Bazaar way but last Sunday I took myself along The Bosphorus to Arnavutköy. First I followed the road until I reached the magnificent Bosphorus Bridge and then found a very nice park to rest in for a while. It even had a cat the size of a small cow who decided to spend some time with me as I lay on the grass. Honestly this cat had muscles in her arms. One of the chefs working in a tea garden there told me it was all the 'balik' ( fish) she eats. Anyway after I was released from her control I followed the water's edge which had a lovely Italian Riviera feel to it, complete with very posh boats and gelati shops.

I decided to get one! 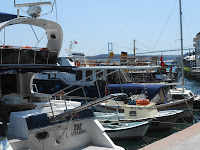 A gelati that is! Boats are not my thing.

There are lots of traditional wooden houses in this area. Many of them need a little face lift but they are still very elegant and I would quite like to magically inherit one. 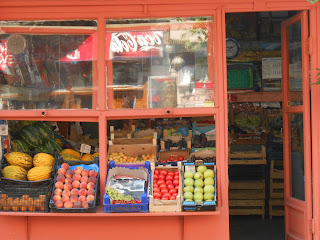 There was also a very colourful fruit shop. Much better than the one on my street which is run by the world's grumpiest man. He always wears the same striped shirt and a grimace. He never interacts with the other men who sit on the street and drink tea. I can't really understand why a grocer could ever be angry. All those rosy-cheeked apples and smiling yellow bananas looking at you all the time. Then again when fruit turns bad...
Posted by Joanna