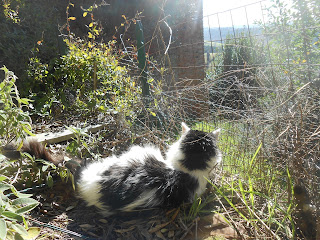 I wish Three Paw and I could go on a holiday somewhere (to Antalya  for example) and when we checked in at the airport they would ask if we had any extra baggage.  I would say 'yes' and give them her tumour to put in the hold and then we would forget to pick it up at the other end. I would call it Signor Nolte ( or Nolte Bey  in deference to three Paw's Turkishness) because of the actor whom I have never liked very much. I hate this tumour. It is so ugly and angry and unwelcome. Three paw is more hospitable towards it and sometimes gives it a lick. I need to break that friendship as soon as possible.

Today has been a good day though. Cloudless sky and a warm spring sun. Three Paw took herself out into the garden which is a good thing. Yesterday she was so unhappy, she cried out in pain and she rarely ever cries. Not because of Sig Nolte himself but because she had a bandage on her leg after the biopsy and it hurt her. When I tried to take it off she became very angry and Pirate came over to give her a slap. This did not help matters.

At least now the bandage has gone. Her paw is horribly swollen but she is eating and doing garden things so it is a good day for us all.

I wish I had other news to report but there isn't much else. Last night I saw someone in my dreams I hasn't seen for a while. We passed each other in the street, our hands linked as we passed, and then we walked on. It was beautiful.
Posted by Joanna