Last week there was a day that was so crystal clear the snow-capped mountains in the distance looked like they had been cut into the sky with precision glass. I could even see them from the window of my classroom which I had never seen before. I felt like I was on some American prairie with Brokeback Mountain watching on from a distance. I even glanced out the window from time to time praying for a couple of gay cowboys to ride on past. Alas, no such luck - the only past I encountered was the past perfect. 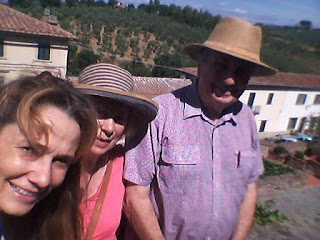 Anyway the next day a summery haze fell upon the hills of Vinci and I think perhaps it may be the last glimpse of those mountains I will see for a while. The Vinci to which I refer is, of course, the birthplace of Leonardo.  Lucky he was born there I say and not some of the other places around here like Poggibonsi. I cannot imagine Leonardo Da Poggibonsi garnering the same level of respect.

I visited Vinci last summer with my folks. It is a sleepy little town with an interesting museum and a lovely vista out over the hills. I could even make out San Minitao if I squinted hard enough. Quite a few of my students come from around those hills, such a magical place to be raised I think. 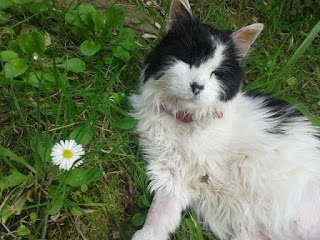 Ha! You didn't think I would finish a blog entry without mentioning Three Paw. She is doing great. I mean for someone who has just had chemo and has a nasty Nick Nolte on her leg. In fact the swelling on her leg has gone down and she is walking much better so I think Nick is feeling the pinch a bit. I was told to expect a couple of days of anorexia from her but she has been eating like a little furry star. She has a different relationship to food than other cats who were born into privilege. She really does appreciate its arrival and its need to be consumed. It doesn't mean she always eats an awful lot but she engages with it and makes a purring 'rar rar' sound as she eats. 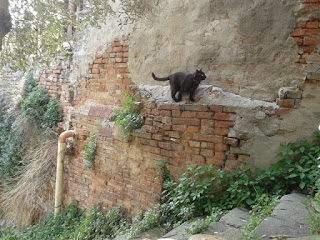 Pirate meanwhile has been climbing walls and trees as part of her spring fling! 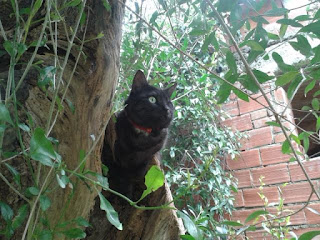