Summer has returned to Istanbul. Sort of. The last few days have been breezy and cool. More like September. I like it this way.
Tonight I got accosted by an AK Parti member (the ruling party in Turkey right now) in my own street . He handed me tote bag with an AK Parti mug, balloon, pen ( for my vote???) and a rather fetching tin (with a picture of the Maiden's Tower on it) filled with Turkish coffee.
'Iyi kandiller, ' he said ( Happy Candle Day.)
'Iyi kandiller,' I replied.  'But you know I can't vote. ' He looked perplexed and then smiled like I had promised him Erdogan's final vote. There was another woman walking nearby who was similarly accosted. She started laughing like a maniac and twisting her finger by her head. My assimilation, I feel, is now complete. 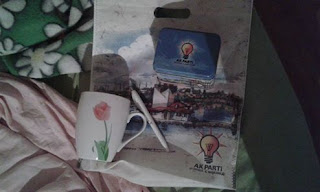 You know I think I am going to keep the bag though. Some memorabilia of beautiful times when I  swallowed gas while lying in my own bed. I might even pour myself a G&T to go in the cup and laugh uproariously in a manner of which I suspect they may not approve.
Posted by Joanna