So for Day 3 of DaFest da Boss I decided I should go shopping. Not to buy anything of significance, just to enjoy a good browse mid-week. Fear not though Fest sticklers Da Boss still had an important role to play for I had to cross over her in order to get to the shops and cross back to get to more :-) and on each crossing I made sure I cooed and clucked with endless verve. I started my day by going over  to Yeni Kapi which meant I had to take the relatively new metro line which crosses over Da Boss at a stop called Halic (Golden Horn).  I absolutely love this ride because one minute you are in a dark, airless tunnel and the next minute the metro bursts into the sun and onto a bridge which gives a glorious view out to both sides of our Lady Straits.
I had chosen Yeni Kapi as the kick-off because I wanted to have lunch at the Syrian restaurant  - Fez Food.  (Yes folks - Da Fest da Boss is not an early-risers tour! ) Sadly for me the restaurant was closed during daylight hours due to Ramazan but happily for its workers it means they are resting all day and not working until night which is only right and just. 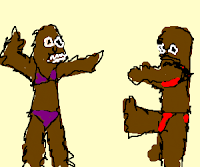 Lunch plans thwarted (but with good cheer) I headed over to Sultanahmet because I wanted to begin the rest of my day with a couple of eye-gulps of the Aya Sofia and The Blue Mosque. It is amazing how rarely I visit these two great laydees while living here but every time I see them I find them as beguiling and mysterious as ever. Especially the Aya which reminds me of a set from StarWars. Then again, everything can remind me of StarWars if I let it. (Example: upside down dustbin = R2D2; Three-Paw's midnight bull-roar purr = Darth Vader breathing; me in a bikini pre-wax = Wookie.)

There was a little market running near the Blue Mosque which had the usual trinkets in it but they were also selling Kanlica yogurt which I have heard is the best yogurt in the world so I bought a small tub and sat under a tree to enjoy it. Num Num.

I found this very helpful too...I wonder where the office is? 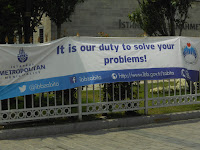 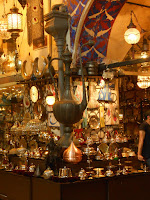 Now there is only one place to shop with a pouch full of yogurt and that is the Grand bazaar which I made my way to using some of the sloping backstreets that give tantalizing glimpses of the the Marmara sea. The Grand bazaar was as frenetic as ever. I do love her. There is never really anything I want to buy in there ( or can afford) but I love the glitter and colour and fragrances - even hirsute sweat has its place in these merchant alleys. I spent quite a while wandering around there until I discovered that a board marker (teacher's curse) had leaked through my bag and was having a right old scribble fest on the front of my skirt. I quickly asked for  a bin and discarded the perpetrator but the scribbles were there to stay. Luckily I am familiar with rogue scribbling  from my university days when a biro let loose on my bottom for an entire day at campus and it was only when I go home and looked at the back of my Coca Cola shorts I discovered it looked like a four years old had gone to town.   A bit schapshal to be honest but never mind. Half an hour later I unwittingly stepped like an elephant into a sinister grey puddle so it splashed up me and another woman (who go got quite kisgin (angry)  so I looked even more schapshal. Plus the corn on the cob I ate which dribbled all over my front.

But not without crossing the Galata Bridge. 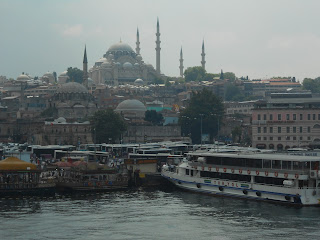 Fishermen out. Birds a flutter. 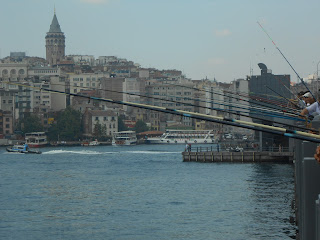 And a final browse down Istiklal Street.
I mean look at the view from this clothing shop window.  Da Boss - she be everywhere. 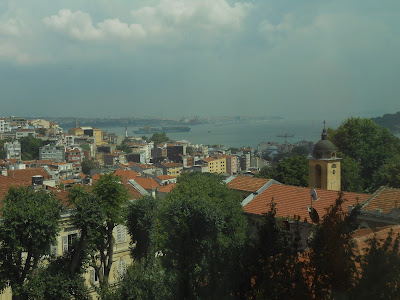