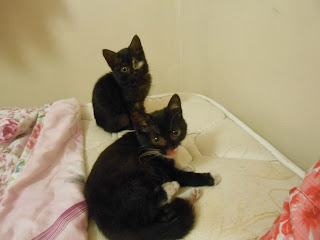 Sometimes I invite Lucky the Pirate's brother over for a play date. Generally there is a lot of piggery followed by mass destruction followed by an enormous nap. It also give me a chance to give Lucky's brother his medication (as he has his own infection.) His mama doesn't mind as long as I bring him back for their nightly cuddles. It must seem kind of strange to take a street cat in for a few hours and then take him out again but this is Istanbul and nothing makes sense. The truth is, Lucky's brother is a very tubby little boy who gets all of his mother's love. He is one of the more fortunate street cats. He is doing as well as he can out there so the best I can offer him is a meal, a few cuddles and some hours in a safe environment to run like a mad kitten who owns the world. Often I go out to check on him late at night and I find him sleeping on his mama in a box undercover. None of it is perfect but he's doing OK. And Lucky likes having a buddy to tear up the town with ( although secretly sometimes I think she is relieved when he goes home.) And I'm sure her brother gives lovely reports to his mama about how his little sis is doing.

Three-paw remains a most unamused Queen.