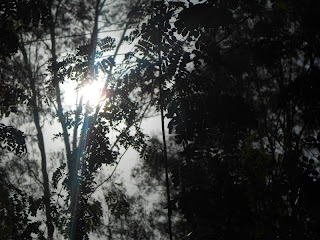 There was total eclipse here in Queensland today. Unfortunately the full eclipse was only visible up in Cairns (which is over 1000 km from where I am)  but we were still treated to a partial form down here in Brisbane.  I like total eclipses. I like them so much I even set my alarm clock and get up early to see them. The last one I saw ( partially) was in London in 1999. I remember the sky drowning in a silvery-milk light so everything became eerie and otherworldly. It was the same again this time. Now being a sensible laydee I did not view the partial eclipse with my naked eyes  (I am blind enough as it is) so I got dad to manufacture one of those pin hole paper things. Actually mum made one first which was a beautiful circle big enough for the sun to actually fall through. Then dad came out and did one which was a little closer to the size of a pin. We then stood in the front garden and tried to view the eclipse. Mum and I kept on criticising dad's pin hole by pointing out that there was no use in making a pinhole in the shape of a crescent moon until we realised (duh!) that it was actually the eclipsed sun coming through the hole.   Not the sharpest moment. Anyway  after we had been sufficient pleased I frolicked about the garden in my pajamas with the cat enjoying the mystical, milky light that is the partial eclipse.