Today I took a day off from work. It felt good not to teach or to praise or cajole. I had planned to spend the day at home fiddling about with some writing I am working on. Maybe paint some stones as well or perhaps even lie like one too. But then this afternoon I thought what is the point of a day off if you don't go out and do day off things - like shopping and coffee. So I ended up buying myself some nice underwear and going for a wander around the Basel Christmas markets. Every year they have a market down in Barfusserplatz. Nothing ever changes here. The stalls are the same, the Gluhwein tastes the same. The only thing that is different is the commemorative Gluhwein mugs which says 2011 instead of 2010, 2009 etc. I used to like these mugs. Not so much any more. 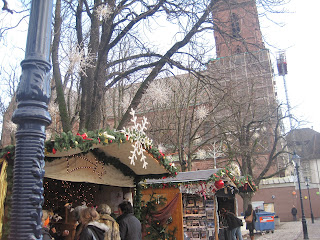 This year they have also set up a satellite Christmas market up near the Munster (the Cathedral).  The stalls are different and well spaced out. The lights look like giant snowflakes between the trees. I will have to go back at night to get a picture of these. There is an area with open fires where you can cook bread etc and a Wunsch Buch to make you wishes. The Wunsch Buch used to be down in the Rathaus ( the aptly named townhall.) I remember going there two years ago and someone had written ' Tod FC Zurich' Death to FC Zurich. (FC Zurich is the main rival football team of Basel.) Somehow I suspect this was not in keeping with the book's intention. I am happy to report that this time the book was filled with illegible children's writing and one-legged Santa drawings which is much better. 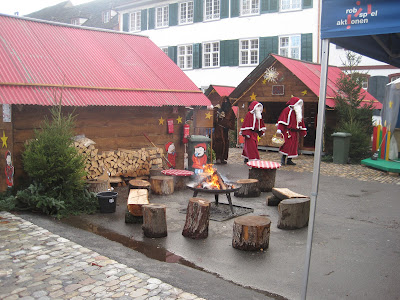