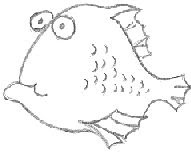 When I was nine years old I heard a story which I like to refer to as Walter-The-Overhead-Projector-Fish.  It was told at school as part of RE  ( religious education) which was given at school in those days . It was a simple story told through a series  of overhead projector scribbles that a three year old would have been proud of. The drawings may have been simple but their impact was immense. Basically poor Walter got washed up to shore and died because nobody could be bothered to throw him back into the ocean. As he lay dying on the beach he kept calling out to passers-bys but nobody heard him or perhaps they ignored him. Then when he died a lady walked past, took pity and threw him back into the ocean but it was all too late by then. I'm not even sure what the point of the story was  - be kind, be helpful, think of others, don't be cruel, fish can speak English you just have to bend over to hear them - but I was devastated by this tale. Nobody else in my class was but I was so shattered my mother ended up having to take me home such was my grief.She didn't try to console me with the fact that it was only drawing, it wasn't real; she knew Walter was real for me so she let me cry and mourn his overhead projector passing.

Nowadays I still think of Walter the Fish, particularly when my heart is in pain and I feel as if I am not coping as well as I would like. I think of him because he reminds me of my nine year old self who still dwells inside and who deserves to be honoured. I know she is very sensitive and can suffer terribly but she also comes from the same part of me who builds incubators out of green gift boxes to save dying birds; who shows patience and love to her students even when she has none left for herself, whose imagination is so big she sometimes falls right inside it.  Walter the Fish showed me how big my heart was even at age nine and  the fact that it is still big now shouldn't be seen as a weakness  but as a strength. Yes it means when my heart is hurting there is a lot of it to heal but I am sure my nine year old self would much prefer that I feel every break than sit stony-faced watching as Walter the Fish loses his way.

I remembered that 'Wicked Game' was a favourite or yours. A few years ago I sent you a mock/pseudo/perhaps true valentine's email with a song attached and it was a toss-up (ooer) between that hackneyed Elvis song I did and 'Wicked Game'. Maybe I’ll do an acoustic version of the Chris Isaak song for you next year.

I read your blog and I look upon you as you do that crazy blue chandelier person. You are doing what I wish I had the impetus to do. Charing Cross, dancing and having fun – they seem so long ago and yet so immediately in my mind they cannot be anything but precious.