You know one thing I will never understand is people who pay to sit at concerts. Actually I do understand it because people do it all the time and I’m all for freedom of choice. I suppose what I mean to say is one thing I will never do is pay to sit at a concert...well not until my knees give out anyway. It’s like going to the dentist because you feel like having a lie down or visiting the gynaecologist because you’re lonely - it's just not right. Concerts are about dancing not toe-tapping. They are about feeling free and in the moment. They are about finding the courage to throw your arms up in the air, sing out of key and just let go. Even when you know that at the end of the show, when you bring your arms back down, everything will be exactly the same. The same worries will be there, the same problems, the same grief... but at least for those two hours - at least while the music plays - you are suspended in the air - your heart is completely free.

Well, last Friday night I went to the James Blunt concert in Zurich and I felt free. I know I know. I can hear some of you shuddering just at the very mention of his name but guess what... he makes me happy. He is my guilty pleasure. I like his pretty tunes, I like the whole posh voice thing, I like the fact that he doesn’t take himself too seriously and I like the fact that I generally have a high chance of remembering most of his lyrics because they are fromage to the highest level.
I read somewhere that the secret of happiness is freedom and that the secret of freedom is courage. Well, I had the courage to dance unabashed and unashamedly to a man with a higher voice than mine last Friday night and for those two hours as I spun, sung and swung I felt freedom. I felt happiness.
I might have forgotten how it feels now but I still remember that I felt it. 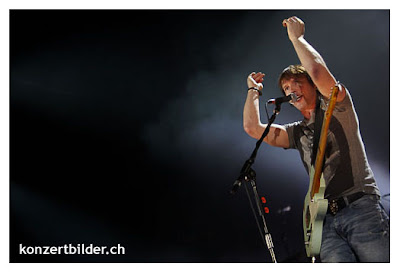 Lovely story Jo, brought a smile to my face as does your talented bendy kitty. Love D the P