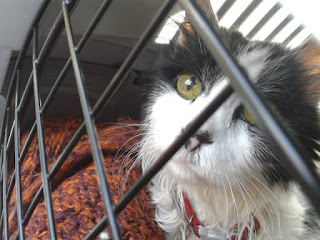 So last Monday I  took Three Paw for her third round of chemotherapy. To get her to hospital we have to take a bus, a train and a tram. We also have to walk the length of my village which means that every second person I pass says 'gatto' to me and points at my carrier.
This time, however, I was stopped by an elegantly-attired woman in a bold, red blazer and smart black skirt. Her hair was pulled back into a tight bun and she must have been around seventy, a wiry seventy at that. First, she insisted on greeting Three Paw and then she began telling me about a kitten she had found in her garden with....wait for it...the image of the Virgin Mary on her forehead.  Only in Italy! She was very adamant about this image and said that people had not believed her, even her dentist ( which seemed to trouble her the most.) Anyway, then she told me how she had taken a picture of the kitten and brought it to the dentist so he could see the image for himself. Apparently he had taken one look at the picture before exclaiming 'vero' and doing the sign of the cross.
I thought about searching Three Paw for some sign of Mary while on the train but then I realised since she is Turkish, it would probably be Mohammed. And given depictions of Mohammed are considered blasphemous, I have decided not to inspect her in too much detail.

Some people have said in the past that she she has a hint of a Hitler about her. I think it might be the solemn little mouth. 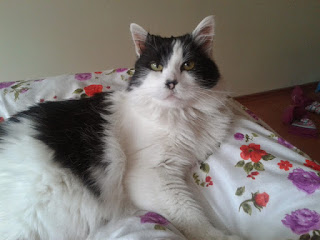