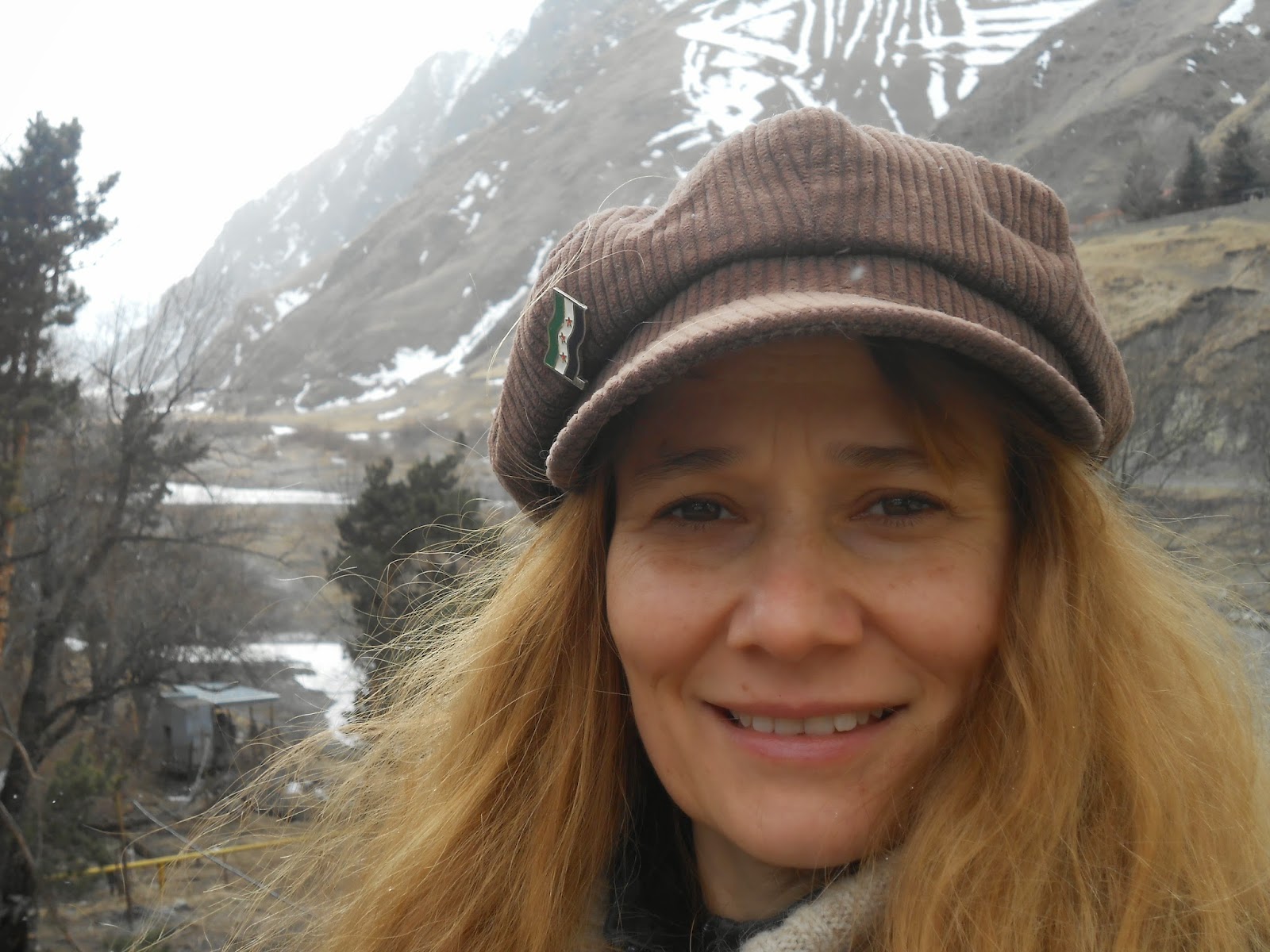 When I was six years old I was terrified of the London Underground escalators (after a couple of ciders, I still am!). I mean I would cry and backtrack the closer they came and thought nothing of climbing up the stairs that were built alongside them. Even though the cement stairs went on for hours and my family would be waiting for me to make it to the top.
I liked tube stops like Knightsbridge and Covent Garden (not only because they had shops with toys) but they had elevators which meant the whole Hans Holbein Dance-of-Death charade could be avoided.
I suppose for my six year old self, I felt I had more control of the situation.  If I fell it would be all my clumsy-footed-self's fault not some sudden lurch of machinery or an impatient commuter tossing me by. Not much has changed really I suppose. I want to control everything in my life and I keep on making the discovery over and over again that I can't. I control very little and the things I think I can often turn out to be things I can't. Like other people's hearts, minds even that bad-ass Pirate and her Three-paw beating ways.
Now the reason I am writing about escalators is really for no other reason than the fact that when I was in Tbilisi  I rode on the longest underground escalator I have ever seen. You actually could not see the bottom from the top it was so far down and the lighting (a sort of  Soviet shade of jonquil) just made the whole descent even more mysterious. And as I rode into the depths (the air becoming more acrid with each breath), lumbered with a backpack which made my tipping point even higher than usual, I thought of my six year old self and how far (and how little) she had come. Control it seems, does not improve with life but perhaps acceptance (of its lack) does.

Anyway my whole reason for riding the escalator was not epiphany-based. Rather I had decided to head to the Caucasus mountains. My destination - Kazbegi -  up near Russia's border.

Excite-atrovsky-asaurus.
It meant a three hour journey on a marshrutky ( Georgian mini-bus) which whiffed slightly of cheese (maybe me), alcohol, sweat and cow.  But I kind of like those smells while I am travelling, it reminded me of my trips around Poland back in the nineties.

The journey was lovely. Mountains always are. One one side were the ski resorts and the other  - the border to South Ossetia.  Now I had promised my parents not to go near any contentious borders but I felt fairly confident that no crusaders were going to ski over the edge of this formidable mountain range and intercept our whiffy bus.

When I arrived in Kazbegi I had no plan so fortunately a very smiley man,  who spoke wonderful English without any need for definite articles, picked me up in his little car and said 'Come. I host. I have hotel.'  Which indeed he did with a wonderful warm bed, hot shower, a rather acceptable bedroom view and a home-made rose wine that made Georgian and English intermingle without effort.

It was actually bitterly cold and bleak by the time I settled  as you can see by my street... 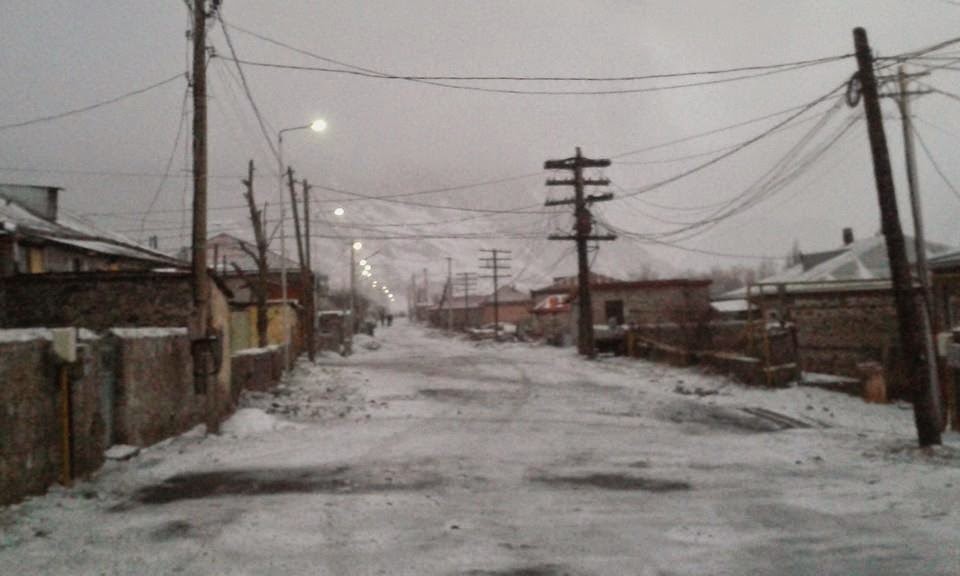 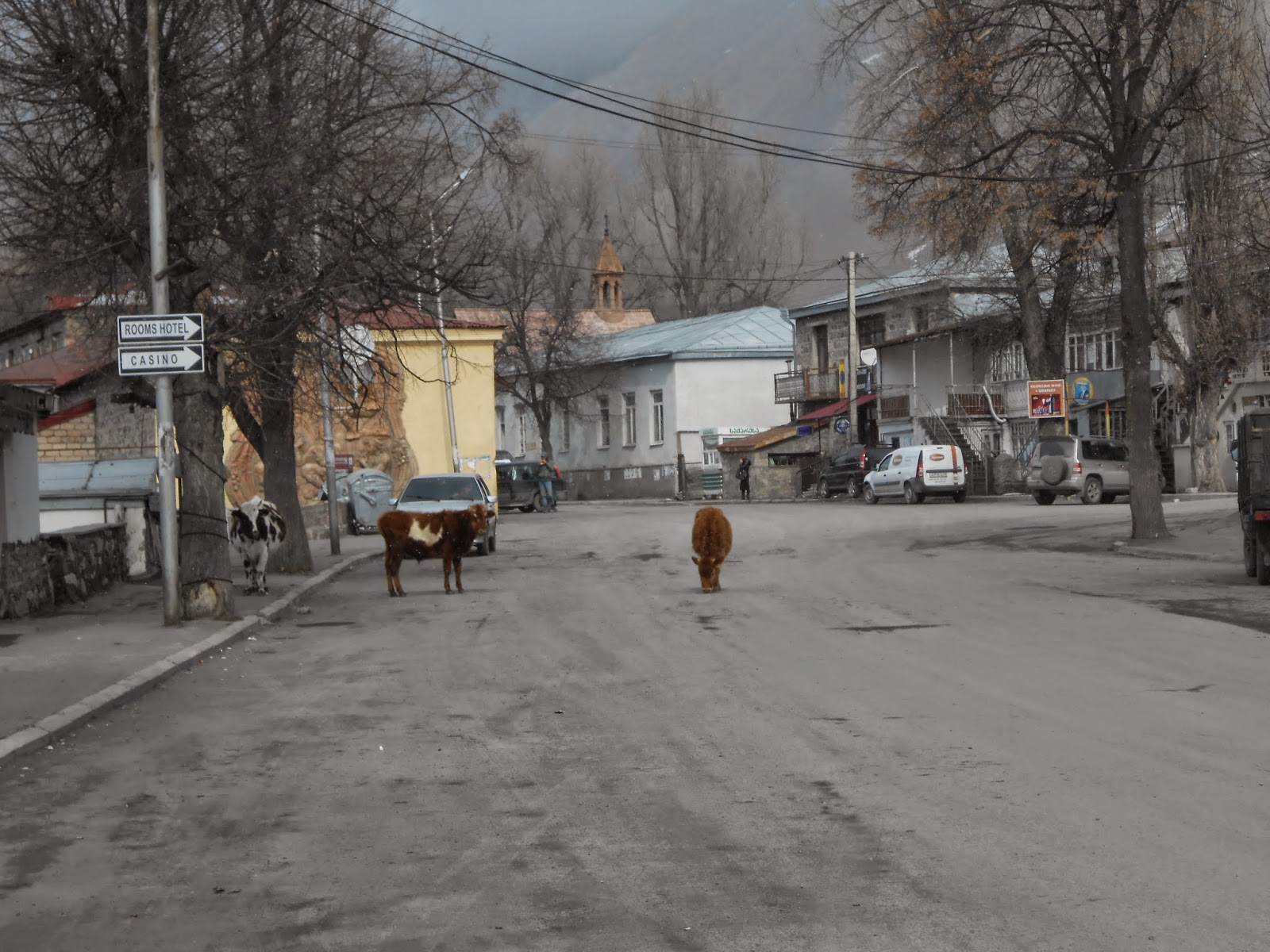 So I passed the rest of the day wandering in the town, meeting cows, dogs, pigs and chickens. 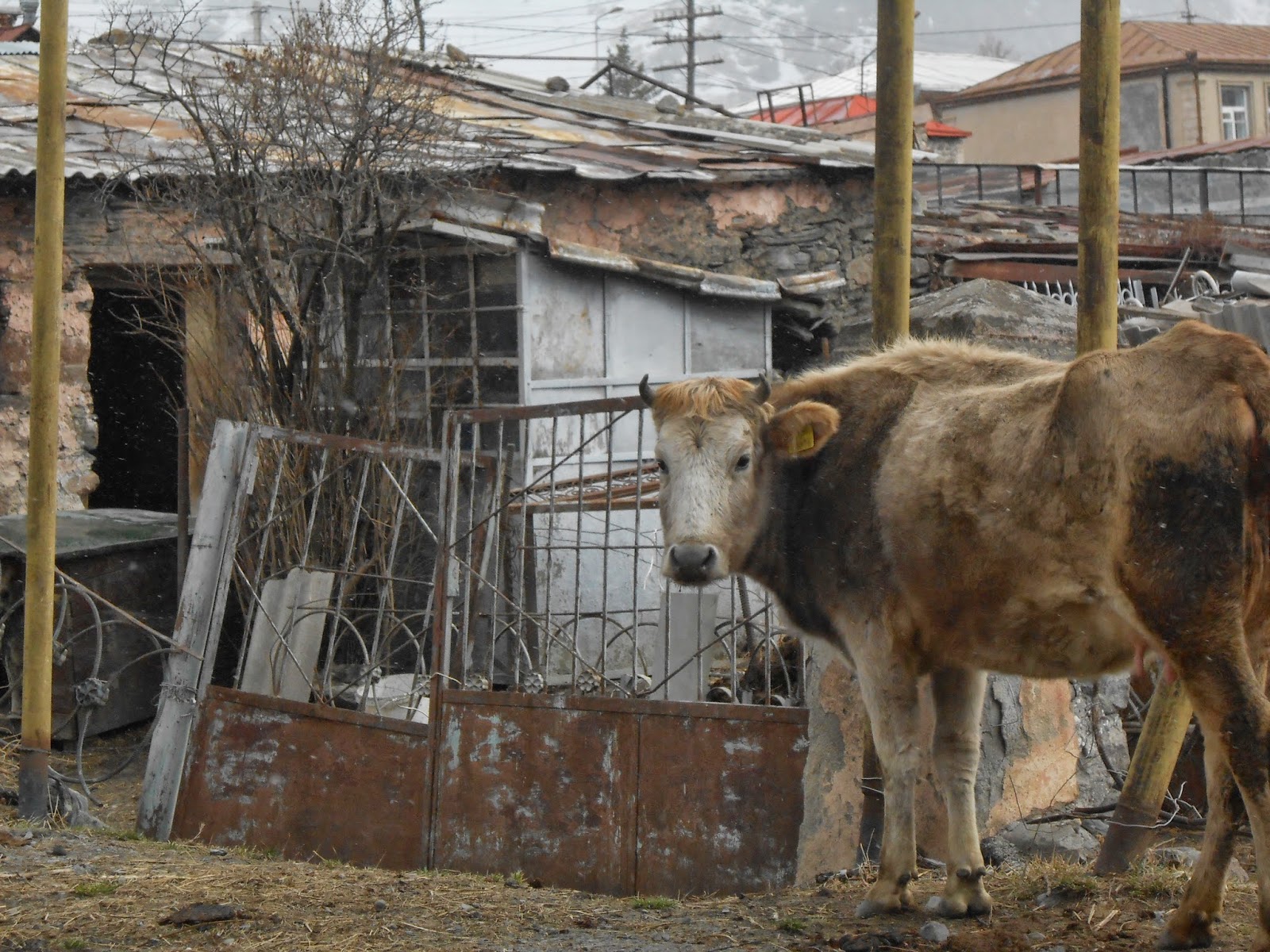 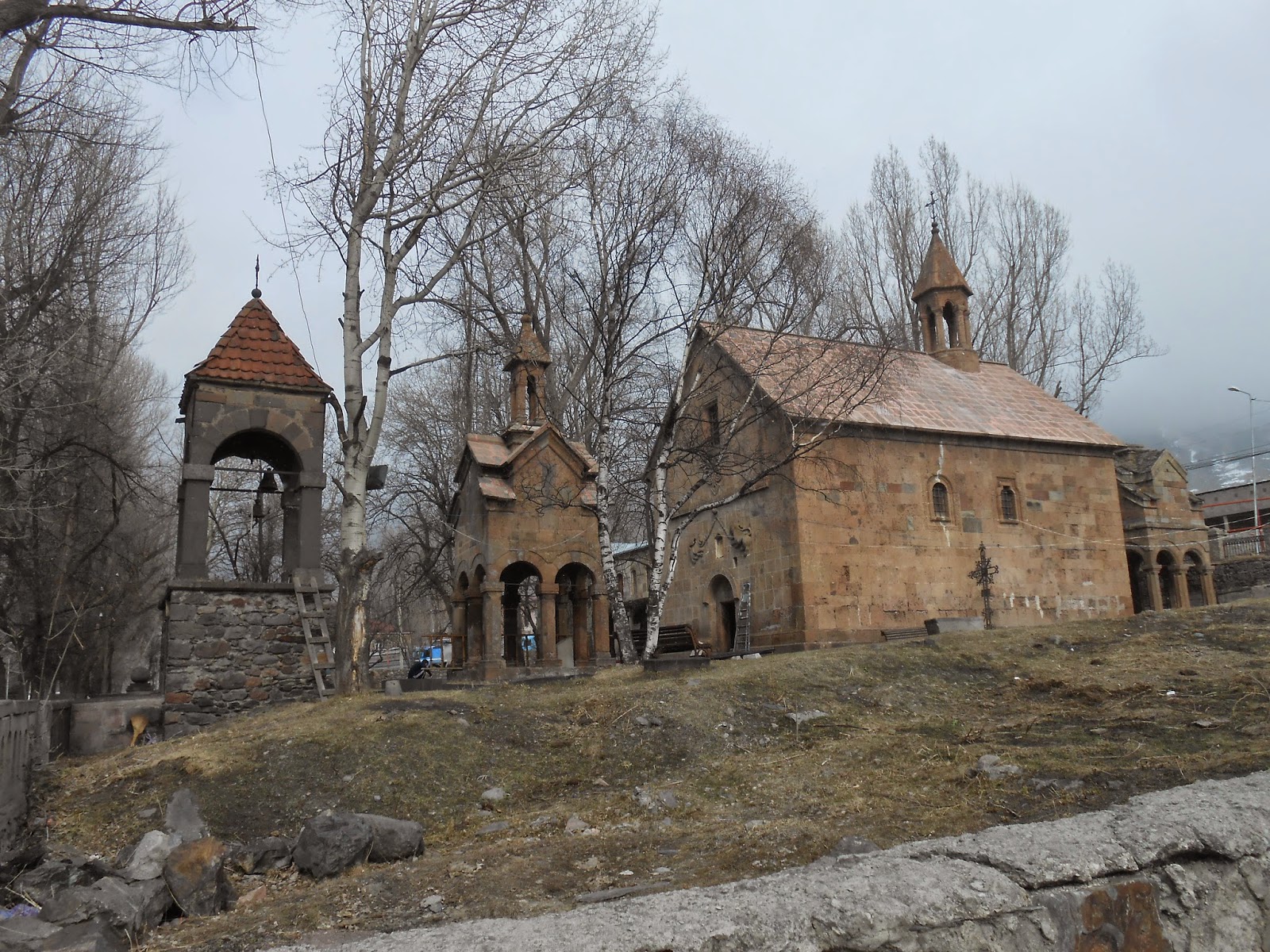 And eating Borscht at the only restaurant - in readiness for the next day's climb! 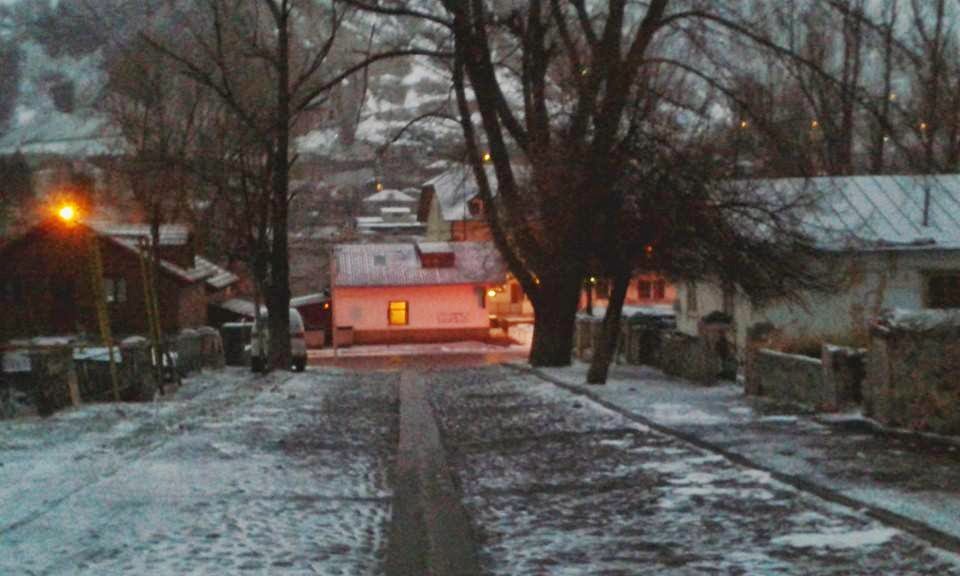 Sometimes it can be lonely travelling on your own and one can easily slip into a melancholy of earlier, more companionable days. But what's the choice really. You are where you are - each and every day.  And you can either ride the escalators that scare you to death or stagnate at the top and be alone anyway because absolutely every one else is riding them  as well.
Posted by Joanna