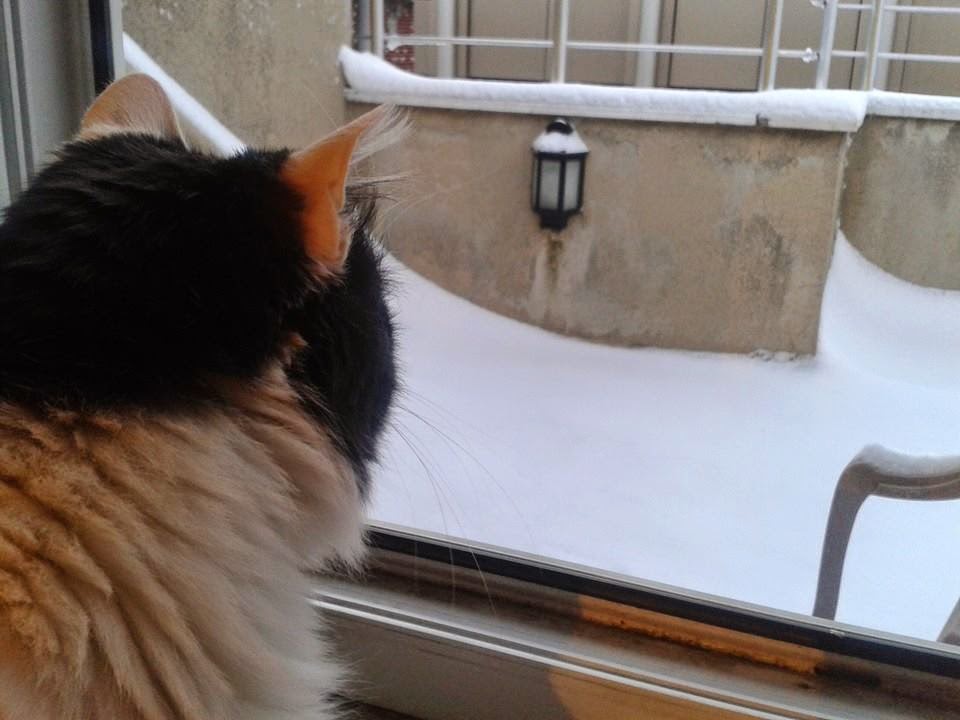 Right now my parents are sweltering in Brisbane humidity and Three-paw and I are freezing our little toes off here in Istanbul. The world is indeed a topsy-turvy, ridiculous place.
I, of course on a purely personal level, am delighted with the snow. When I used to live in Switzerland snow was of course exciting but it didn't really affect you. It just meant snot hardened in your nose that bit quicker. But in Istanbul -  glorious, mad Istanbul -  snow days mean school closures and school closures mean business closures and this means no classes....joy of joys. Last night  some of the teachers and I had one of those delicious impromptu pub night at the Pikap ( a local pub in my new area) where we played Taboo and drank raki and ate lots of cheese. It reminded me of the snow day we had last year which ended up in much the same way.

Except even better this year, the next day was declared a snow day as well!!

Of course snow days are not good for everyone in this city. Not good for street cats and street dogs and especially for the poor Syrian families huddled on cardboard sheets. In comparison to last year, I have seen a lot less families on the streets which means the Government must be doing something, somewhere...but it is still truly awful to see young children and their parents begging for money, food, shelter. With the help of the wise woman I have been at least been able to dole out blankets, food, shoes etc on an ad-hoc basis although sometimes it feels like so little, it feels like nothing at all. But I think it is important to approach it as making a difference in someone's moment, at least helping them along to the next point. Today, for example, I gave a little girl a brand new jacket. Blue with owls on it and a neon pink inlay. She was so excited when she saw it she ripped off her threadbare little jumper, threw it in the snow and stretched out her arms to me as if to say ' dress me.' She felt so proud in her new jacket and it gave my heart a mixed feeling of blessing and despair. I do believe that little children need to be given colourful things sometimes. Things with cute animals on them, new things that they can hold and say this is mine and I am a child.
I don't think though by giving her this jacket today that it made me anymore special than anyone else. Some people ( particularly on facebook)  have called me an angel and it kind of embarrasses me. I am not an angel. I don't do angelic things. When I give that girl a jacket I just do what so many others are doing every minute of every day and to be honest I wouldn't even write about it here except that I wanted to highlight the importance of giving colour and light to the vulnerable young.

Hopefully for that small moment, giving them a glimpse of childhood. Something many of us in the West take for granted as a right.
Posted by Joanna