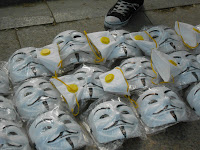 Last night I was teaching my Monday monsters when all of a sudden we heard the sound of banging pots in the streets around the building. Apparently an Istanbul-wide pot-banging fest had been planned for 9 pm to express support for the protesters. It sounded like a mountainside of Swiss cows on a copulation binge but it was heartening to hear all the people speaking out albeit with wooden spoons, saucepans and whisks. I wasn't sure whether my students would want to talk about what was going on but they were very keen to discuss everything they knew. I think they thought 'poor yabunci' (foreigner) she doesn't understand anything whereas I probably have learned more from international media than they have from their own.
Right now Taksim Square has an almost carnival feel to it. People selling watermelons, waving  banners, making music. My street has been blockaded with old gates, slabs of concrete and other building debris.

The carnival will end though.
Of this I am certain.

In the middle of the night I woke up with burning skin.
There was gas in my bedroom from out on the streets.

I hadn't wanted to buy a mask. I thought it was being overly-dramatic...but I bought myself one day.
Posted by Joanna