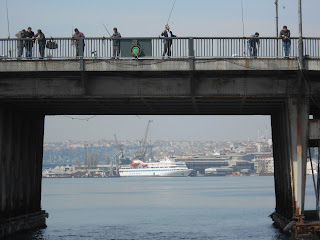 Yesterday the sun finally came out so I decided I should go on a short excursion (gezi). I started by giving Three-Paw a pat as I left my house. His/ her coat ( I really can't decide which) was lovely and warm from the sun and I could hear and feel his purr.

After our daily commune I went down to the tram and caught it to the port near the Spice markets. I had decided that instead of going on the usual Bosphorus type cruise I would take a boat up The Golden Horn instead. 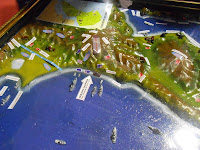 First though I noticed a big tent outside the Spice Market with Cannakale written on it. Inside  was a small exhibition on the 1915 Gallipoli campaign. There were maps and diagrams and lots of shrapnel, personal belongings etc set out in glass cases. For the Turkish this was a successful campaign but as I wandered about the display with my fellow Turks all I could think was how stupid war is. A hundred years ago our two nationalities were at war and yet here I am years later working and living among these people...and possibly eating them out of lentil soup. 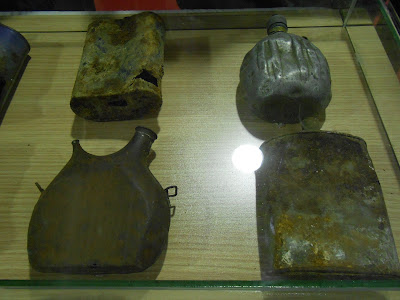 After I had finished paying my respects, I boarded a boat to Eyup which is at the end of The Golden Horn. 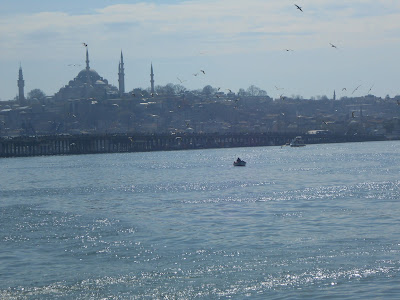 I noticed The Mavi Marmara moored by the edge as we sailed down the channel which I found very timely given the recent apology by Israel. 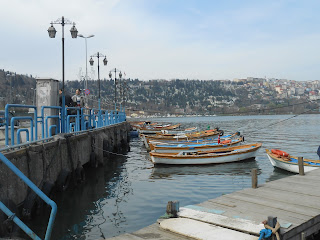 Eyup is the last stop on the trip. The town has a very conservative feel to it. Very different to where I live.
I decided to walk through the complex of mosques and up through the cemetery.
One of Mohammed's friends ( after whom the town is named) is supposed to be buried here which makes it a very holy site.
I found the cemetery to be a very peaceful and pretty place. Half way up I saw the tomb of a professor who had been killed in a car crash in Australia. Instead of saying when he died it said he had "migrated to Allah" which quite liked.. 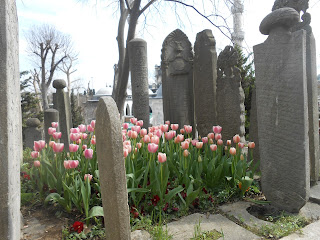 At the top of the cemetery is a cafe where I had a cup of tea and ate a fresh simit. 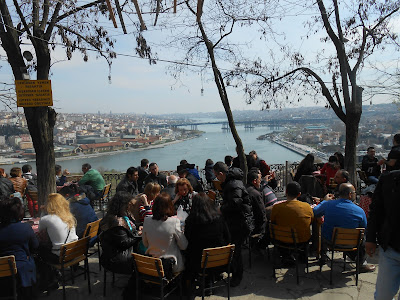