My baggy and chaz bangelis

Had my bag stolen while I was in Manor Department store yesterday. I don't usually do my grocery shopping in Manor because it is a little bit expensive for peasant teachers such as myself but I had been invited to dinner and Manor make the best little fruit tarts. ( The closest I can find in all of Switzerland to the ones you can buy in every patisserie in Italy.) The theft happened very fast because (being a finely-tuned bag-lady) I became aware of my missing appendage within minutes of it happening. The worst bit was the bag had the keys to my apartment and because  I have just moved I hadn't given the spare set to anyone yet. Anyway I am not going to bore you with the whole story but I have to say that I found  the staff and security in Manor particularly unsympathetic and unhelpful . The police were a bit better ( except for the guy at the front desk who appeared most incredulous that I should be troubling with him with a theft at all)  but I have seen kids eat a plate full of brussel sprouts quicker than the way they moved to assist me.


zum bespiel
'Wie ist deine Tasche.'
'Es ist blau mit eine geld Giraffe.'
A minute later, a bag is handed into the station which is made of leather and is pink.
'Oooh is das deine Tasche?'
' Ist Das blau???'

The policeman then (almost gaily) informed me just how many hundreds of franks it would take for me to get the key service to help. :-(   Anyway after he wrote my information down on a scrap of paper I went to my wonderful Slovakian friend, Rita, and we called my mobile which was still in my bag. A while later it  called back and it was the police with the bag. All my money was gone but at least the keys were there. Thank goodness. You know it was only a bag and  while losing the money is disappointing I think what was even more disappointing was the attitude of the people around me.  My friend said this is probably an example of where Swiss neutrality is taken too far. No one wants to get involved. They throw their arms up in the air and say 'It wasn't me. It's not my problem.' I suppose with normal people on the street I can understand this ( well actually I don't - see previous blog entry ) but when store security and and (to a lesser extent) the police are so disinterested it leaves a very bad feeling in your heart.


***
On a brighter note- it is chaz bangeli season right now in Basel. Chaz Bangelis are basically baguettes filled with fondue cheese. They are delicious although you should always eat them while wearing a raincoat or a bin bag because the dribble factor is incredibly high. I even have a friend who has nicknamed his penis - the chaz - in honour of this wonderful invention. 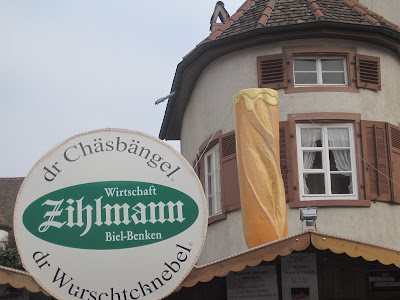