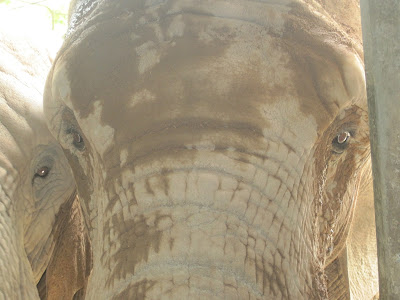 Today I discovered one of the perkier sides of being an English teacher - you get to teach students from different professions (including zoo-keepers) and today my zoo-keeper student took me around her work. In some ways I think our jobs are very alike - I mean we are both in charge of cheeky monkeys and... well I suppose that's it really -  if  I am truly honest I am probably in less danger of having my finger bitten off and I don't have to chop up fish for treats.

Anyhow let me start with introductions - This is Ramona - the coolest zoo-keeper in the world. Ramona comes from Dresden but has worked at Basel Zoo for ten years. She is living the dream as she has always wanted to work with animals.
So first we visited the elephants and the elephant zoo-keeper very kindly let us in the back to say hello to his big grey friends 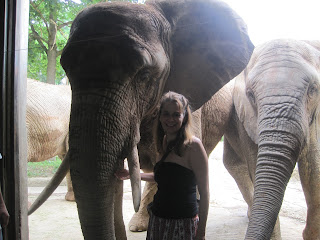 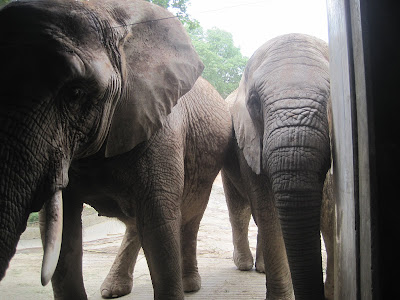 After the elephants we went and saw the place where they breed the grasshoppers to feed to the birds. There were thousands of them which was not surprising since every third grasshopper seemed to be in the throes of great passion with another of its kin. Fair enough really -  all they do down there is eat and breed until ...well until they 'complete' in the words of Kazuo Ishiguro. I also saw  a bit of gratuitous porcupine sex which  actually had a lot more finesse than one would expect ( given  the spikes and all.) There were also some very cute baby porcupines. Oh and some one month old snow leopard cubs looking very cute with their mama. 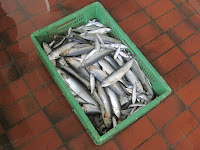 Now one of Ramona's chief responsibilities is the sea-lions so a little later in the afternoon we went to prepare the fish.  I offered to help. She said I didn't have to but I was determined to be a proper sea-lion keeper so I helped divide all the fish up ( sans gloves of course - in the spirit of a true keeper.)


Then Ramona and I went to see the sea-lions and she did a little behind-the-scenes training with one of the lady seal-lions whose name I could never quite catch but is probably something like all-magnificent-queen-of-the- sea- and-most-excellent-fish-eater/ ball balancer!


The lovely thing to watch was how keen the sea-lions were to play and how they slopped about on the floor around me in such a playful and relaxed manner. They looked at me quite a bit and sniffed my skirt but they were very content and happy. I fed one of the seals called Queenie who is blind in both eyes. She liked to shake the fish in the air when I gave them to her so there was fish guts aplenty! 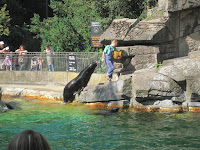 Then Ramona went out to feed the sea-lions in front of the public. This is actually a bit of a faux feed ( I mean of course they feed them) but the real feeding takes place afterwards behind the scenes. This lovely big fellow ( 280 kilos worth) is called Uranus and Ramona told me that after the public feed I would be able to feed him out the back. I watched her closely to take notes. 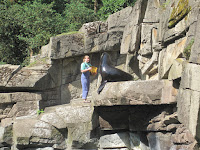 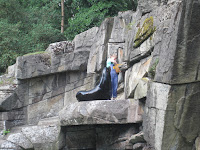 After the show all the sea-lions slopped joyously out the back for the festival of the fish.
And then it was my turn with handsome. 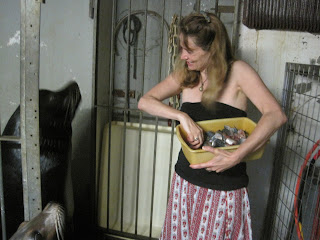 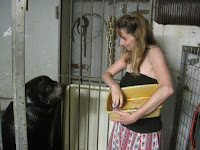 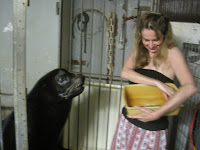 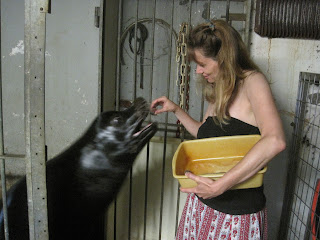