Today I decided to hunt out some old, hairy men who swear and whistle while they play backgammon because I fancied a challenge. No such luck on the backgammon front although I did encounter a few hairy types who would have made my friend V shudder. V says the only hairy man that should ever be allowed in a woman's life is her cat, Alf. She hates the sight of any hair at all although after further interrogation it seems that eyelashes, head hair and eyebrows (if properly controlled) are acceptable. She is one tough lady.


Anyway I started my morning with breakfast on the main balcony. I didn't sleep so well last night - a nightmare in the middle - so I was sort of glad to get up and face life instead. There were a number of Swedish gringos having breakfast too so we oohed and aahed about the delicious bread until Mercy, the very adorable Sri Lankan woman who works here, came to tell us that there was no water in the house but a man was coming now. I was most surprised to see that he actually was. Normally you expect the problem to go on for hours if not days. Mercy also told me on the quiet in her lovely sing song accent: 'I like too much the cricket you know.' I think she felt safe confessing her dirty secret to me because I am Australian and would therefore understand. Which, of course, I pretended I did.

After breakfast I walked down to the Charles Helou Bus Station which involved a few highway crossings and some chaotic footpath negotiations. (I even saw an army officer clutching at his chest as I made the daring run between the mad traffic.) Once at the station I was lucky enough to find a bus leaving in 'only 10 minutes' (ha ha) to beautiful Byblos. I decided to wait the '10 minutes' on a seat by the bus and make friends with the bus driver - Hairy #1. He was actually a very smart looking fellow ( not oily like some of them are) and wore a very crisp, ironed shirt. Of course he had relatives from all over Australia. As a result of our happy little chat I ended up in the BDGS (the Bus Driver’s Girlfriend’s Seat – a phrase that was first coined with some fellow travellers in Syria two summer ago. In a service taxi this means the seat at the front by the driver and in a bigger bus it is the seat directly behind him.) It is usually the most comfortable seat in the whole bus and means that sweets can regularly be passed to you by said driver without him taking his eyes off the road for too long. I was quite happy to be in the BDGS today because it gave me a great view out the front windows to the coastline. At Byblos he pulled over by the side of the autostrada and indicated it was my stop. (Not a full, proper boyfriend - he would take you to the door!! Of course I had no idea where to go after wards so I followed my gut which said go to the sea, Joanna, go to the sea since Byblos had once been a very important trading port and all.

Byblos today is definitely not a trading hub but is is a beautiful old town with medieval ramparts, a lovely harbour, little shops and a crusader castle to boot. It is also very small which makes it easy for the geographically challenged to find their way round. My first stop was at the Church of St John where I met toothless Michele (Hairy #2) A very old man clutching his rosary beads, who wanted his picture taken and a bit of a chat. I went through my Arabic knowledge and a bit of French which seemed to satisfy him and then he released me. 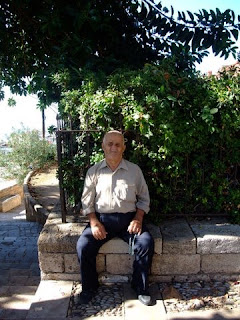 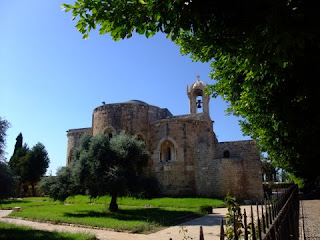 Byblos harbour really was very lovely. It was hot and sunny and the water was so clear I could see all the little fish sunning themselves between the boats. Here I met Hairy # 3 an Italian-Lebanese man called Mario who offered to take me out on his yacht for a cruise and a swim.

‘Oh I am sorry I don’t have my swimsuit I’m afraid.’

I declined the offer although there was a part of me that thought if I were a man I could have probably taken such an offer and leapt in the sea a la natural. What freedom. Of course if I were a man Mario may not have wanted to take me swimming in the first place. 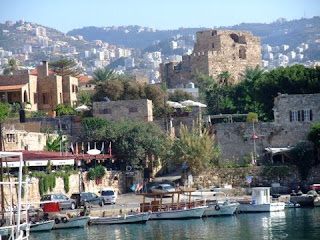 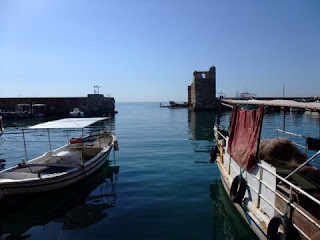 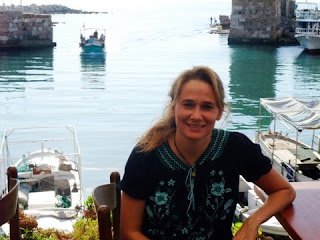 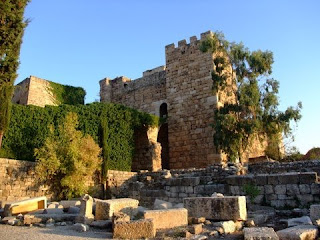 In the afternoon I visited the crusader castle which still has a nice bit of castle intact and an awful lots of ruins. I love a good crusader castle especially the ones in the Middle East where they let you run about with no regard for safety. I eventually found a date palm to sit under and happily gorged on all its fallen dates just like a real bush tucker woman. I then decided that as it was nearing sunset I would sip a glass of wine down by the port and say goodbye to another day. I chose the least assuming place of all – not ritzy as the others but with a lovely view and two delightful young boys ( not so hairy) from Syria. 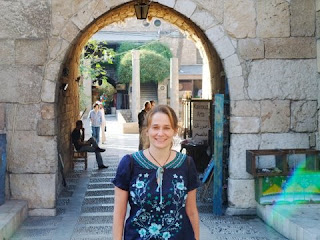 Ooh and I also visited the souks where there were some lovely soaps which I inhaled with such gusto I began to sneeze. I met a very excitable Lebanese woman who told me how welcome I was in her country about five times before teetering up the cobbled path in her strappy golden heels. Once the sun was gone I thought I should probably think about heading back to the Beirut whereupon I realized I didn’t really know quite how to do that. I had been dropped off at the motorway but really I wan’t sure where to go to return. Eventually though I hacked my way up to another part of the autostrade where I found some sistas waiting for a service taxi to Beirut. We all hopped on and I stayed until the bitter end since I couldn’t recognise where I was. My driver Hairy #5 eventually took me to the ABC mall because obviously that should be the drop-off point for any lost ladyee in Lebanon.

Now I’m home. Not very hungry but tired which is good.

I find it interesting that when I am travelling on my own I have this faith, this unwavering faith,that I will always find my way home. There will always be a way even if I don’t know how it will come about. This, I find, is a very beautiful thing.