a near shopping experience

No water again today ( I write this as if it bothers me when it doesn't :-) You have to accept how things function in the place where you are. Like I know that in Switzerland if I recycle tin cans after 7 p.m. I may be deported.) This time however the the water man was late!! Mercy was unimpressed ( but beaming about the 20/20 cricket – I beamed with her, I am disloyal in that way.) We had a chat over breakfast. She was sad that I had got up too late for the good stuff and that there was only a baguette left whereas I was glad I had managed to stay in bed even if I had just lain there awake. She is going home to see her sons in Sri Lanka for Christmas but she told me it was on one condition. That she is going to return to Lebanon after one month. ‘I like it too much here,' she explained. 'I used to work to look after my sons now I work for me. What I going to do if I go back to Sri Lanka? Look after the grandkids. No thanks, I rather be here and relax.’ She said it with a cheeky smile but you could see that she was serious. I love Mercy. She is as tall as a bird and as chatty as one too.


After my lazy start I decided to spend my day enjoying the various architectural styles of Beirut while doing a little shopping. I even got stopped by a taxi at one stage while strolling the streets because he needed directions. I must be blending - chameleon that I am. I feel v proud. 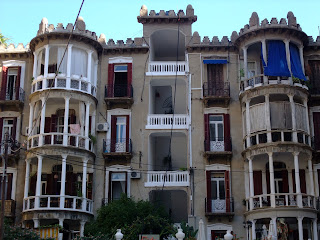 I began by going down the street which runs across from my home. (See picture to the left.) I have walked down this street a few times now. It is a hot potch of ruins, renovations and lovely old style colonial buildings with lush green trees and bright, fragrant flowers. Today, though, one part of the street was lined with soldiers and policemen with shields. They were standing in combat lines outside a university building while the army patrolled either end and a few tanks sat around with various missile-shaped objects hanging out the side of them. I ended up walking through the middle of it – there were a lot of other students walking through the middle too clutching their books and their phones ( I wonder if one of them was mine :-)). This is the thing about Beirut. It changes every day and people just go with it. A street that is quiet one minute has barricades and guns the next. Of course most of the army looked about ten years old so it could have been an elaborate game of dress-up for all I know.

Now my plan had been to shop but it seems that as soon as I decide to throw caution to the wind and spend all the zeros that I have, there is nothing I see that I want to buy. Niente. Zip. Null. Actually I did see a dress ring with I love felafel written on it but I am holding out for one that says I love fattoush. I went back to the shoe shop in downtown Beirut and spent a very sparkly half an hour trying on shoes. The trouble is all of them have impossibly high heels and vertigo can be a problem for me. I also tend to wobble like an unstable lady or perhaps a bowl of jelly in heels. Very nerve-wracking for the wobblee and any innocent bystanders!! I eventually found a very rainbowy, glitzy pair that I liked and went to buy it with my visa card. Of course no one knew how to use the visa card machine so I went in search of a cash machine. Not a single one in the area would oblige me so sadly I had to walk away. I felt even sadder for the poor man who had nearly sold me the shoes. Maybe I will get back there tomorrow.