Not much happening at present. Students are trickling in so I am almost making rent - eek! My bank even invited me in this week to point out that my account was empty. I wanted to suggest they pop a little in to make themselves feel better but I couldn't find the right phrase. Actually, they were very nice and supportive of my job change ( which I may have made sound slightly more lucrative than it is)  but I think they were more interested in checking I was still here. We were all smiles at the end so I feel at ease with them.

Luckily my students like to bring things like whole pumpkins, olive oil squeezed from their own trees, and new boots they can't fit, so I feel quite blessed. Poor but rich if you catch what I mean. 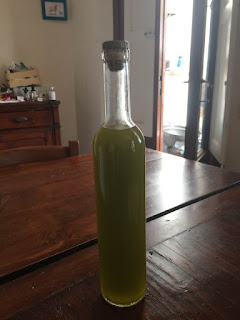 Last weekend I did have visitor though. An ex-colleague from Florence who came with her enormous camera to take photos of my village, Franco the barber, and my laydees in the backyard. 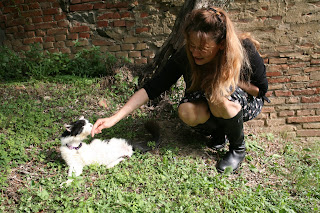 Now, this friend is beautiful. I  mean she literally takes the breath away of the people she passes. I can see them gasp when they see her so you can imagine the collective gasp of my village, which is predominantly (from what I can tell) made up of dirty, old men, when they saw her.

First I lightly poisoned her with a rather salty stew but she even ate two servings so she was a good victim. Then we worked Three Paw and Pirate in the back yard, trying to capture their essence. Funnily enougn Pirate kept looking right into the lens. I can never get her to look into my camera but I think this lens was big enough she could see inside it and it intrigued her. Or she was as beguiled as the dirty, old men by the photographer. 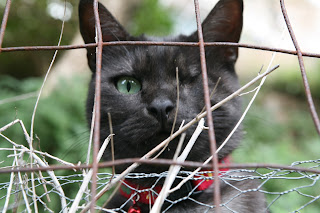 After, I took my friend to see Franco the barber, which was kind of like a lamb to the slaughter. Franco has such a curious shop filled to the brim with oddities perfect for photographing. 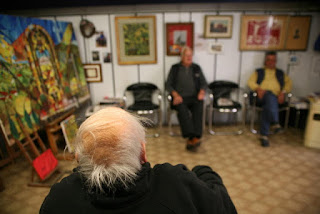 For better or worse though, it had a couple of customers in it who were not shy about telling my friend what they thought of her.  Actually, they are never shy about saying what they think but my Italian is not good enough to understand everything they say to me. My friend's Italian is, however, perfect even though she is Greek so she understood everything they were saying - which didn't seem to stop them. I wasn't there because I had left her alone to work but I was a bit horrified at the rather direct questions they asked about her breast size for starters. Fortunately, she knows how to handle these types and she came out with some brilliant photos and a radiant smile.