So a colleague at work bought her fifteen year old daughter some winter walking boots. After wearing them once, the teenager decided they weren't for her. Lucky me :-) They are slightly too big but with thick socks they are a comfy fit for woodland ambling. I am so delighted and grateful for being their recipient as I haven't bought myself shoes in over two years and most of my others have holes. 2017 is already looking up.

Anyway to celebrate the shoes another colleague of mine, whom I shall call the woodlander, decided to take her dogs (and me) for a gallivant out at an area called Balconevesi.  It was rainy, misty, and miserable but all of us had our tongues to the wind in no time, running and laughing, and making all sort of discoveries.


Like a first-aid kit in the middle of a field with 4 syringes and some anti-inflammatories in case we should encounter a viper. Unlikely in winter but I felt impressed by the forethought. 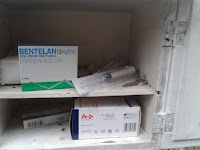 We also discovered a place called Il Purgatorio which had a bunch of picnic benches next to what looked like an electrical grid. Two of the benches had an unappetizing view over the local cemetery. Why anyone would picnic there was beyond me.

Nearby was a magnificent tree on top of a dome of land  that gazed out over all the tumbling hills. 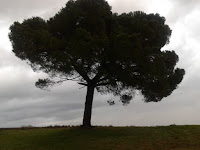 And at the edge of the dome you could see San Miniato in the distance. If you squint really hard in the below picture you can see it. 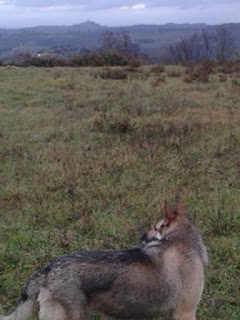 After we had finished, we ate chocolate-stuffed pastries and cappuccino.

It was good to get out, and amble, and be alive.