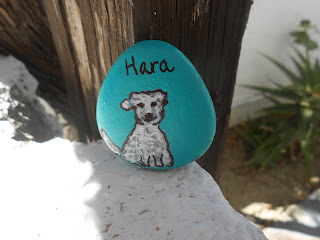 I am pleased to report that Hara is settling beautifully into her new home.  She can walk with the lead now ( instead of dragging her extremely sand-daggy bottom across the ground) and asks for cuddles all the time. She won't need to be on a lead normally out there on the farm but while she is adjusting they want to make sure she doesn't run away. She is playing happily with the other animals and once she has had a bath and haircut she will probably be the most gorgeous dog on the island...if not the world. I have made a stone to give to her 'new' mummy.

It's interesting because a number of strangers have approached me on the beach asking me about 'my' dog. They are all happy and relieved when I tell then where she went. One very nice Greek lady said to me ' you and the dog had such a lovely connection and then I saw she was gone and I was afraid of what had happened.' I also met some English girls randomly and we were just talking about Skyros in general and then they mentioned the dog they had seen on the beach and how adorable she was. I told them where she was now and they said ' O you are that Joanna.'


****
I feel ready to leave the island now.  I feel depleted in a way and I wish someone would pick me up in their arms and drop me off at my new home too.
Posted by Joanna