So my love affair with The RheinCenter continues. They even have Miracle Whip ( a whole pyramid stack built in its honour), goon wine and vegetarian gyros. I took Ulla again and she got so fat with shopping I needed assistance lifting her off the tram! 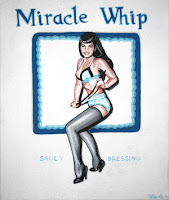 Obviously now Miracle Whip has re-entered my life I will need to start exercising so this week I went swimming -twice -at the Rialto pool in Basel. I really want to write how great it felt. How invigorating it was. But the truth is it was brutally disappointing. Not the pool itself. It is very nice with big windows looking out to the perpetual grey. No. My disappointment stems from the monsters I had to share the pool with. Honestly I was swim roadkill in the lap lane. Now don't get me wrong if there was a slow lap lane I would have taken it but all the lap lanes were equal and the general rule is as long as your lapping you are allowed to use it. But honestly these people just could not be bothered to swim around you. They actually swam over me and they were wearing goggles so they could clearly see me and it wasn't because I was being slow anyway.  I was just doing breaststroke while they were doing freestyle. Even worse though was the guy who actually did a partial pool turn on my back at the end of the pool. I was slipping across to begin my next lap and he did an underwater turn and launched himself off my back. I don't understand where this rudeness comes from. I used to live in London ( population a zillion) and I would swim twice a week at the Victoria swimming pool right in the middle of London. The pool was infinitely more busy but everyone respected each other and their space. If you needed to pass someone you did so courteously and if you accidentally brushed someone you apologised. Not here though it seems. The right of the individual seems to trump that of the community at every turn. I had to laugh at the guy who backstroked right into the wall though (particularly as he had backstroked over me minutes earlier.) He must have thought the wall was going to bend for him.
Posted by Joanna