I have two homeless cats living in my garden. One of them had a home previously I think because he is so docile and affectionate and appears to have been neutered. The other was a nervous bag of bones that turned up last summer. I couldn't go near him at first. Now he is the fattest-cheeked boy I have ever seen. Every time he sees me he rolls at my feet. Asking for a cuddle, for a tickle or a tick removal.

It is a nightmare really. I can barely afford my own girls but I can't turn my back on the two boys, it just isn't in my nature.


Anyway over the winter I decided to build them an outdoor enclosure out of some plastic sheets, an old crate box and discarded fleecy jumpers. Well, you can guess who has taken to it...my street laydee Three Paw, of course. I don't know if it is nostalgia or instinct but she loves a good lounge in that crib. 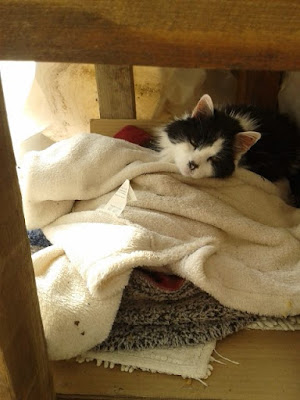