Today I went on a short train ride to the nearby town of Montelupo. This little borgo is famous for its ceramics which is fortuitous because that is why I visited it. I was on a mission, you see. I wanted to get some sort of garden ornament to lay on my Dude's grave.


I have a lot of regrets about not cremating him ( I even rang the crematorium to see if they were into exhumation at all. Apparently not - until after five years have passed. I don't really understand why but after a few eye dribbles, I thanked them for their time.) I also regret where I buried him. I wish I had put him up against the shady wall where I buried an unknown cat some time ago. But on the day he passed, I just wasn't thinking straight.
Now, however, I have decided I want to leave something permanent on his spot. Well, not permanent I suppose - nothing is that really ( except plastic maybe ) - but my apartment has been sold and I must move which means that on some very grey, wintry day next January I am going to have to walk out of my garden one last time and leave my beloved boy behind. 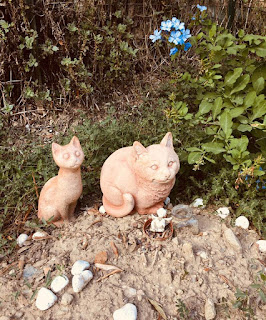 I try to think of me not leaving him there; that he is really with me all the time. I also try to tell myself  (in a contradictory sort of way ) that this is where he would want to be; that he was born in these hills and despite his short but greatly-loved life he belonged back in these hills. I want to leave an ornament on his grave so the new owners who come are aware that he is there. Of course, they may just take it away but they will know in their bones that the rumpled earth below them is sacred. This is the only way I think  I can find at least a semblance of peace. 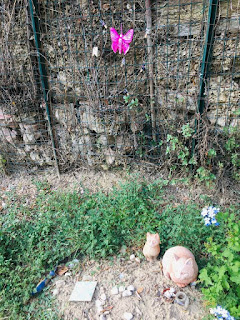