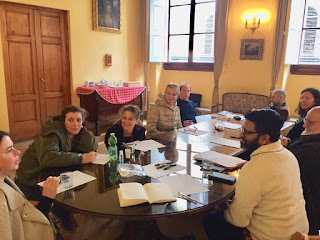 It is interesting when you see photos of yourself taken unawares. Perhaps they are the truest glimpse of how you were feeling at that moment. A guide, if you will, of whether something is working for you or not. The two pictures I have attached are from the second of two writing workshops I attended recently and I look so engaged and happy in them I almost don't recognize myself.

The first workshop had happened two weeks before these pictures. I wasn't going to go as I have an ambivalent relationship with these things. I don't feel you necessarily learn to be a better writer from these meetings but they can be useful if you need a reminder of why you love to write. Mainly I went because these past months have been so consumed by teenage monsters (whom I spend waaaaaay to much time preparing for)  that by the end of the week I realize I have not spent a single minute creating or feeling whole.  So I went to the first one hoping that I would at least put something on paper, and I wasn't disappointed. In fact, at the end, this woman came up to me and said "You should be writing" which made me feel very cherished. 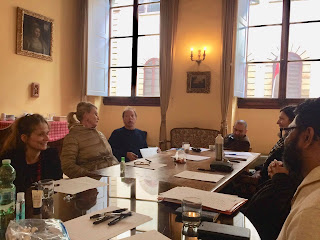 Anyway, then the facilitator of the course announced there would be a second workshop. I knew that this would not be possible for me. The workshops cost 20 euro a pop and the first one had been an SOS to myself but there was no way I could afford another one, especially so close. So I explained I couldn't come in very general terms ( it is embarrassing to admit you cannot afford something) and a day later I received mail from the facilitator offering to waiver my fee because he felt my writing voice and my feedback was vital to the group's success. Part of me wanted to say no because I find it hard to accept a free lunch but then another part said: "Go on Joanna,  people offer things because they want to." So I went, and from these pictures, I can see I was very happy. I even came out of it with a new story idea about a man who keeps a bag full of planets in his back pocket.

Two days later I received a manuscript rejection from an agent in America which made me feel very sad. Bubble short-lived, I guess.
Posted by Joanna