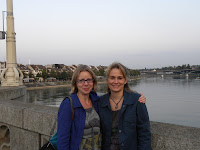 She arrived on Saturday afternoon (which gave me enough time to sweep all the underwear under the bed & remove the crusties from the fridge) and stayed until Monday morning. I must say that it was very pleasing to have a bit of Florence in the house although she herself is Irish. Unfortunately she came bearing sad news - my bella bici 'Speranza' had been stolen in Florence just the night before. Now officially I have no bikes at all :-(

Naturally I took A to see all the sights of Basel and we ate like ravenous pigs at an Indian restuarant after some rarver disturbing pre-dinner conversation which is oft the case when one has been imbibing beforehand.

The following morning I made A some of my arabic coffee thatI had brought back from Syria. I have only made it once before and it was - I was told - too bitter. Determined not to make the same mistake I added a cane train worth of sugar to this batch which made it rarver sweet. True to her Irish affable form, A replied that she would drink this caffee, so she would, if it was the last thing she did.

O, how I love the Irish charm.